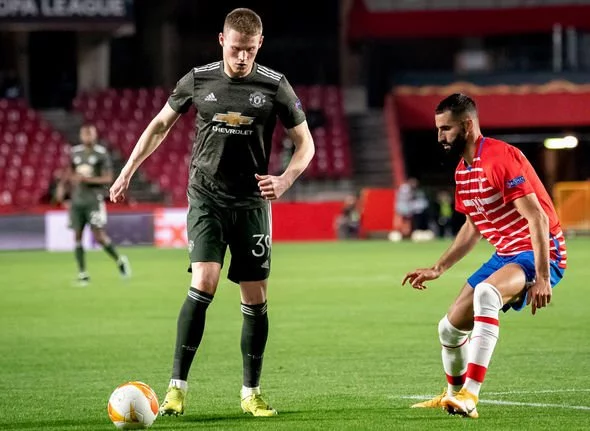 Manchester United beat Granada on Thursday evening with goals from Marcus Rashford and Bruno Fernandes giving them a positive first-leg lead. There was a big negative for the Red Devils in the form of suspensions to Harry Maguire, Scott McTominay and Luke Shaw. But Express Sport will now take you through four positives from the showdown.

It was another good night for Rashford, despite the England international appearing to still be crocked.

He picked up a knock in the 2-1 win over Brighton on Saturday night, a game he also scored in.

But he played on with grit and guile before making way in the 66th minute, something Solskjaer had suggested would happen before the game.

Rashford has now scored 20 goals for the season.

And that’s something he’s now done in consecutive campaigns for the first time in his career.

Victor Lindelof is given the nickname of ‘Iceman’ around United’s Carrington training complex.

And it’s easy to see why, with the Sweden international producing a composed display in stark contrast to the club’s suspended trio.

Toni Kroos produced a magical pass to set up Vinicius Jr in Real Madrid’s 3-1 victory over Liverpool on Tuesday night, something that went viral in the aftermath.

And Lindelof did his own, setting up Rashford for his goal.

He may get some stick but the Sweden international definitely warranted his selection on the night, with Eric Bailly again snubbed.

It’s been a frustrating time for Fernandes of late.

While the goals and assists have dried for club and country up in recent times, he’s now managed one of each in his last two matches for the Red Devils.

Fernandes scored his first goal for United since the 2-0 victory over Manchester City on March 7 to all but seal their passage to the semi-finals of the competition.

He’ll be vital to the club going forward.

And if he continues to shine they could yet scoop a trophy.

There’s been plenty of talk about David De Gea potentially leaving United at the end of the campaign.

The Spain international appears to be second-choice nowadays, with Dean Henderson picked for the Brighton win on Sunday.

But De Gea got a much-needed clean sheet, with Granada’s misfiring frontline ensuring he had a quiet day at the office.

Solskjaer knows he’s got a conundrum when it comes to his two goalkeepers.

And how he resolves that will be fascinating to see.

Solskjaer admitted after United’s victory that it wasn’t a ‘perfect night’.

"It was not a perfect night,” he said.

“We got three yellow cards and three suspensions. 2-0 is very good result. We know how difficult it is to come to Spain. We've got to play well to get a result.

"They [Marcus Rashford and Bruno Fernandes] have been exceptional, so important for us. It was a very good run by Rashford, takes the ball fantastically.

“Bruno is so confident on penalties even though the keeper almost saved it.

"Same as always [attitude for next week]. We want to win every game.

“It’s still a young team, a learning team. We have to improve all the time. Football catches you so quickly if you rest. We can’t have any other approach."