Marcus Rashford has teamed up with top chef Tom Kerridge in a bid to encourage more young people to get cooking.

The Manchester United and England star has earned acclaim across the nation for his hugely successful campaigning on child hunger - including twice forcing the Prime Minister Boris Johnson into a u-turn on free school meals during holidays.

He has now launched a project which is aimed at encouraging young people in families who are living below the breadline and who are time-poor, to take up cooking.

He was teamed up Michelin-starred chef Tom Kerridge to launch Full Time – a series of five-minute videos with recipes and instructions on how to cook cheaper, healthier, more filling meals.

A different recipe will be released on Instagram each Sunday morning over the next year – including familiar favourites such as chicken stir fry and broccoli and cauliflower cheese.

Kerridge, the chef behind Manchester's acclaimed Bull & Bear restaurant, will teach either Rashford, a celebrity guest or a family how to make that week's recipe in a cook-along video.

“We’re a nation that works on being very time-poor - we’re all very busy,” chef Kerridge explains.

“This is about peeling carrots and dicing onions, this isn’t about making targines or braising beef briskets - they’re very basic skills and we’re right there at the beginning.

“What makes it really exciting for me is to have someone like Marcus as a pupil who is so eager to learn.

“The heart and centre of this campaign is to encourage people to get into the kitchen and this is a great opportunity to showcase why it is something that’s worth doing.”

Each one of the 52 recipes will also be available to pick up in various forms from selected supermarkets every Sunday morning, with QR codes linked to the video tutorials.

Rashford said: "Following Government investment into Healthy Start it was important to me that we demonstrated the power in collaboration.

"We needed to come up with a creative project that really engaged children most in need, preparing them for what adult life has to offer, whilst also attracting all children to break down stigma around usage of the vouchers.

"This project is for every child and I really hope parents and carers will benefit from having a bit of valuable time together in the kitchen when family activity is heavily restricted by financial restraints.

"I’m proud of what we’ve done here, I’m thankful for Tom, thankful for the Child Food Poverty Task Force members, and I can’t wait to see what the response is."

Tom Kerridge added: "Marcus and I are super proud to be working together to spread the message of how easy simple cookery can be, for even the most inexperienced of cooks.

"We don’t want you to be fighting with your kitchen, and we don’t expect you to have lots of equipment, you can still make great tasting, fun and filling food.

"Marcus has always been one to encourage life skills and cooking is a valuable skill that everyone can embrace and that will see you through the whole of your life. (Marcus even admitted to never peeling a carrot before, now he can!)

"If you can engage with food from the start, you can grow, develop and build your own collection of recipes, and enjoy cooking together."

The 23 year-old United star has previously been praised for his campaigning against food poverty, born of his own childhood experiences, forcing the government into two U-turns and he was awarded an MBE for his work.

He has also been working with Fairshare, a charity aimed at tackling food poverty and waste in the UK. 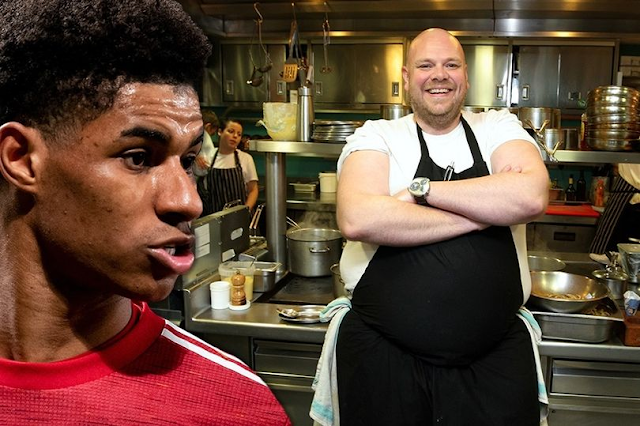