Ole Gunnar Solskjaer had faced pre-match interrogation about the wisdom of denying Marcus Rashford some sorely-needed rest but tonight in Spain the England striker proved just why he is so indispensable to Manchester United’s hopes of silverware.

Rashford claimed the first goal of the Europa League quarter-final first leg, a vital away one at that, even though Solskjaer had admitted he was carrying injuries.

Bruno Fernandes made this an even better night for his manager and team in the 90th minute, scoring with a poorly-hit penalty after being brought down by Granada substitute Brice.

And there was also a solid outing from recalled goalkeeper David de Gea, apparently displaced as United’s number one after Solskjaer opted for Dean Henderson in the last Premier League game.

Still, given the importance that the Europa League now holds in United’s season, with a top-four finish virtually guaranteed, a case could be made that de Gea is actually still his manager’s first choice.

There was certainly no denying how vital this tie was in Solskjaer’s focus, the only competition left for him to win this season if he wants to land his first trophy in charge at Old Trafford.

And if United are to see off to see off the Spanish side next week, and get past Roma or Ajax in a tricky semi-final, then Rashford will surely need to have a major say, with Anthony Martial out for the season and the Edinson Cavani experiment apparently set to end in the summer.

A drab opening half hour at the Nuevo Estadio de Los Carmenes was noteworthy only for the early appearance of an “old school” streaker who momentarily delayed the game.

But when the tie finally burst into life through Rashford’s goal, it was with a goal that was well worth the wait, even if it could not have been simpler in its creation.

Victor Lindelof floated an exquisite long pass, fully 50 yards and over the top of a Granada defensive line that had been caught fatally high up the field.

Rashford was onto it like a predator, speeding away from Domingos Duarte, taking the ball in his stride with a single touch and taking a couple more nudges before pushing it past Portuguese keeper Rui Silva.

It was the England striker’s 20th goal of the season, the second consecutive season he has reached that plateau, making him the first United player to do that since Wayne Rooney over a decade ago. And it served as another timely reminder of how important the impressive young man has become to Solskjaer this season.

Indeed, one of the big pre-game talking points centred on whether the United manager has become too dependent on the 23-year-old.

Rashford has appeared like a player on the brink of exhaustion, and niggling injury, for large parts of the season and Sunday’s win over Brighton saw him pick up an ankle injury that left him a major doubt for the trip to Spain.

Solskjaer admitted before the game that Rashford would not be able to complete a full 90 minutes, but argued in the same breath that he was not risking his player’s health or fitness, either in the short or long term.

How important that goal could be was soon made apparent as Granada, a side assembled for a grand total of eight million euros, finally burst into life and looked to level before the interval.

That pressure saw Scott McTominay and Luke Shaw go into the Portuguese referee’s notebook, bookings that will rule them out of next week’s second leg at Old Trafford due to suspension. Harry Maguire would suffer the same fate after the break.

And two Granada players on loan from Premier League clubs threatened the visitors’ goal before the break; first when Manchester City’s Venezuelan Yangel Herrera volleyed against the outside of de Gea’s post.

There was also a spectacular 25-yard volley, direct from a corner, which on loan Chelsea winger Kenedy struck directly at the United keeper, offering little concern in the process.

Kenedy also opened the second half with a good hit and fired at de Gea yet again from outside the area on 66 minutes, efforts which were dealt with perfectly as the United defence held firm.

But the Spanish side could not build on that momentum and United began to show solid game management with Maguire even popping up on the edge of the hosts’ area and shooting just wide. 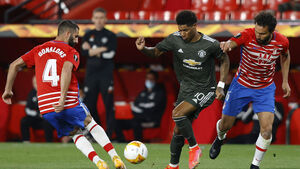