Mikel Arteta has provided an injury update on Martin Odegaard ahead of Arsenal's Europa League quarter-final first leg with Slavia Prague at the Emriates.

The 22-year-old has been in fine form since sealing a loan move from Real Madrid in January until the end of the season netting a vital strike against Tottenham in the North London Derby and winning the Gunners' goal of the month award for his effort against Olympiacos in March.

He then rolled his ankle while on international duty with Norway two weeks ago but was still deemed fit enough to play the full 90 minutes of the 3-0 defeat to Liverpool on Saturday.

However, it has now been revealed that he is a doubt to face the Czech champions on Thursday after suffering some problems with that ankle and Arteta has given an update on his chances of playing in the game.

"We will assess him today how he’s feeling," he said ahead of the game.

"He’s been carrying an injury for the last few days since he got injured with the national team. We have a few of them for the last game when we played Liverpool as well.

"So, it will be today (Wednesday) probably the day when we see where everybody is at and who is available for tomorrow."

The Gunners are scheduled to train this afternoon ahead of tomorrow night's vital game and it is expected to be determined then if he will be ready to play or not.

Aside from concerns over Odegaard though there was more upbeat news on the availability of Bukayo Saka, Emile Smith Rowe and Granit Xhaka.

The Hale End duo missed the Liverpool defeat with hamstring and hip injuries respectively, while Xhaka was out due to an illness.

An update on the club's official website declared all three were up for selection against Slavia Prague and Arteta confirmed that decisions would be made on whether they would start or not later today.

"Yes again, but today is the day when they’re going to be training fully with the team and let’s see how they feel," he said when asked about the trio. 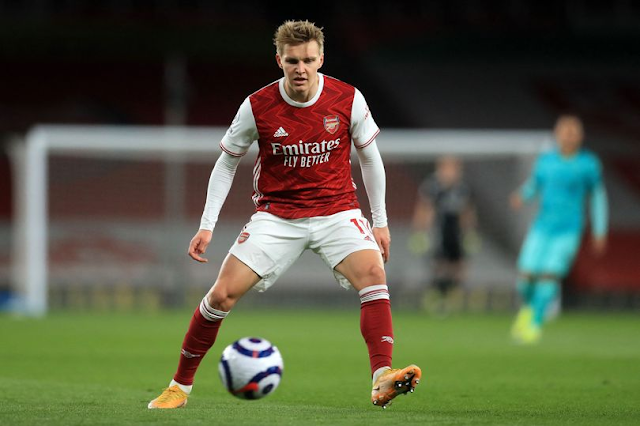