Liverpool missed a host of chances and were made to pay at the death after sub Joe Willock grabbed a stoppage time 1-1 draw for Newcastle ... 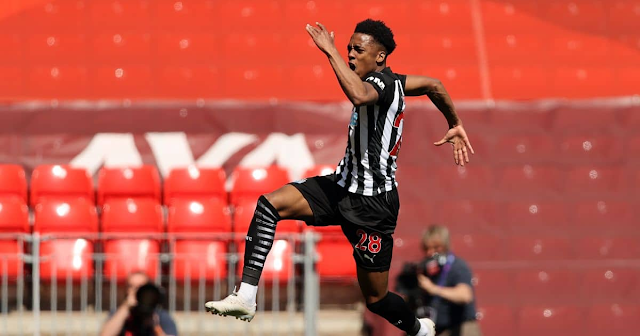 Liverpool missed a host of chances and were made to pay at the death after sub Joe Willock grabbed a stoppage time 1-1 draw for Newcastle.

Liverpool looked to be climbing into fourth place in the Premier League with a 1-0 win over Newcastle at Anfield. But Willock levelled with a deflected finish after Callum Wilson had seen a goal ruled out for handball in a dramatic finale.

Mo Salah (3) set Jurgen Klopp’s men on their way with a smart finish. And the hosts should have been home and hosed after dominating possession and chances. But they wasted a those chances, with Sadio Mane the biggest culprit from their 22 shots on goal.

Klopp fielded all four of his attacking players for the visit of Newcastle.

Salah returned to the line-up at the expense of midfielder James Milner as the one change from Monday’s draw at Leeds, joining Roberto Firmino, Mane and Diogo Jota in a 4-2-3-1 formation.

Salah’s return to the side paid dividends with just three minutes gone when he fired home his his 20th league goal of the season.

Ciaran Clark’s weak header from Sadio Mane’s cross dropped to the Egypt international at the far post and he swivelled and drilled in a fierce left-footed shot despite the close attention of Matt Ritchie. 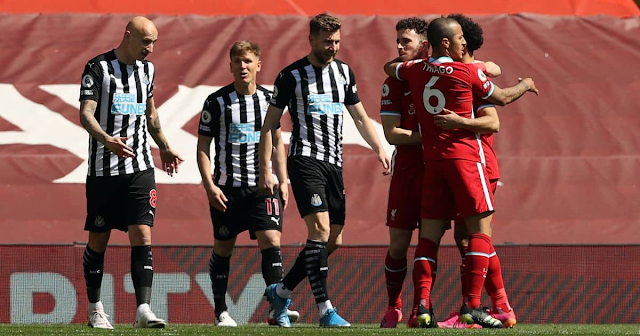 The goal was the 250th in the league at Anfield under Klopp and with it Salah became the first Liverpool player in Premier League history to score 20 goals in a season for a third time.

Salah could have had two, but for a fine stopt from martin Dubravka. Firmino played a delightful ball over the top for Salah to charge on to. He has just the Newcastle keeper to beat but failed to do so, with Dubravka standing tall.

Mane then spurned a great chance after the forward was found in the box by Salah. He just the keeper to beat but stalled and failed to get an effort away.

Mane then poked wide from close range and saw a header from inside the six-yard box fly off target, as Newcastle kept it at 1-0 at the break.

Into the second half and Joelinton was set free, but Alisson spotted the danger and raced off his line to clear.

And then Joelinton wasted a huge chance after getting beyond the Liverpool defence and in on goal. Unfortunately for the visitors he shot straight at Alisson and fell to the floor in frustration.

The ball was then lofted into the Newcastle box and it fell to Firmino, only for Dubravka to scramble it clear.

Steve Bruce brought on Callum Wilson for Joelinton. And then Chris Willock replaced Ciaran Clark as Bruce rolled the dice.

Liverpool though looked most likely to add to the scoreline and Mane set up Salah, who shot into the side-netting.

The Trent Alexander-Arnold fired just over from the edge of the box with a volley after a corner had dropped kindly for him.

Wilson then bundled the ball over the line only to see his goal ruled out. But Liverpool’s relief was short lived as Willock collected a flick on and finished via a deflection past Alisson.