Erling Haaland is reportedly being tracked by both Manchester clubs, Real Madrid and Barcelona ahead of the summer transfer window. Pep Gu... 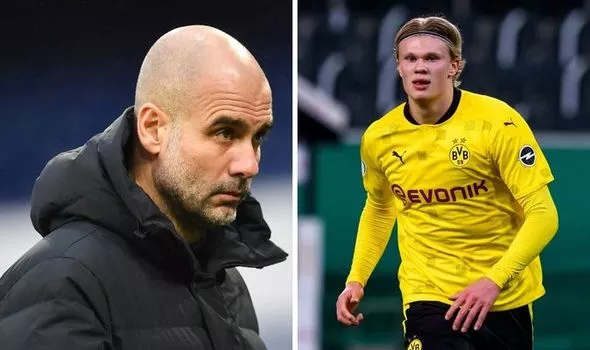 Erling Haaland is reportedly being tracked by both Manchester clubs, Real Madrid and Barcelona ahead of the summer transfer window.

Pep Guardiola has suggested that Manchester City could be prepared to shell out nine-figure transfer fees this summer amid speculation that his side are lining up a big-money move for Borussia Dortmund striker Erling Haaland. Manchester United, Barcelona and Real Madrid are also said to be in the frame for the 20-year-old's signature, with his agent Mino Raiola and father Alf-Inge Haaland travelling across Europe to speak with interested clubs ahead of the summer months.
The Norwegian star will get his chance to impress Guardiola on Tuesday evening when Dortmund travel to the Etihad Stadium for their Champions League quarter-final first-leg clash with City.United's noisy neighbours have been among the Premier League's biggest spenders since the Abu Dhabi United Group took over proceedings in 2008, but are yet to spend more than £100million on one player.Midfield maestro Kevin de Bruyne became the club's record signing in the summer of 2015 when he joined from Bundesliga outfit Wolfsburg for a fee in the region of £64m.A successful bid for Haaland would undoubtedly need to eclipse their previous benchmark, with Dortmund reportedly slapping an eye-watering £127m price tag on their star man.That said, City are one of the few clubs in world football with the financial strength to compete for signings of that calibre, and are in need of a new striker ahead of next season with Sergio Aguero set to leave upon the expiry of his contract in the summer.
Guardiola hinted on Monday that the Premier League leaders will be prepared to part ways with large transfer fees in order to maintain their dominance, despite suggesting last week that big-money signings could be out of their reach ahead of next season."Spending a lot of money on one player doesn't give you an advantage to win," the Spaniard told reporters."Football is a team game, everyone makes a contribution. Competitions are not won by one player, it is every player."So far the club has decided not to spend close to £100m for a player. Maybe in the future it will happen when the club decides it is necessary to improve the team for the next five to ten years.
"But so far, the organisation decides not to do it, and that's why we didn't do it but maybe in the future."When quizzed directly on Haaland, Guardiola responded by showering him with high praise, doing little to ease the speculation over City's reported interest in the Norway international.The former Barcelona and Bayern Munich boss had previously declined to comment on the striker out of respect for his current employers, but could not resist waxing lyrical about his impact since bursting onto the global scene."All I can say is he is an exceptional striker for his age," he added. "The numbers speak for themselves. He's a fantastic player, that's all.
"In that age scoring that amount of goals is not easy to find. The numbers speak for themselves. When that happens it is because he can score right, left, counter, box, header."He's a fantastic striker, everybody knows it. A blind guy can realise he is a good striker. It is not necessary to be a manager."Haaland has scored 49 goals from 50 appearances in all competitions for Dortmund since arriving from Red Bull Salzburg in January of last year.The prospect of a summer departure was boosted by the club's defeat at the hands of Eintracht Frankfurt on Saturday, leaving them well adrift of Champions League qualification and facing a battle to climb up the Bundesliga table with just seven games remaining.