Manchester United may have been a real threat to Manchester City's chances of winning the Premier League had the Citizens not found a way past Aston Villa on Wednesday night, admits Pep Guardiola, who says he briefly feared United were real title rivals before his charges recovered for a huge victory.

City found themselves 1-0 down inside just 21 seconds at Villa Park after John McGinn's effort as the hosts started strong.

Guardiola's men recovered though and were 2-1 up heading into half-time thanks to Phil Foden and Rodri's strikes.

But City were cut to 10 men before the break after a John Stones yellow card for a foul on Jacob Ramsey was upgraded to a red following a VAR check.

Just 11 minutes into the second half Villa also lost a man however as Matty Cash picked up a second yellow and City were able to maintain their one-goal lead until the full-time whistle.

Still, City are now just eight points from their third Premier League title in the past four seasons after winning in the Midlands, and will hope to dethrone current champions Liverpool as soon as possible given their Champions League ambitions.

And Guardiola admitted had City not managed to come from behind for their first Premier League win after conceding the first goal since December 2019, United would be "dangerous" to their title bid.

Defeat would have allowed United to trim the gap to five points, though City's superior goal difference now essentially means two wins and a draw from their final five should be enough for yet another triumph, the club's fifth in the Premier League era.

"Losing today would have made the last games dangerous," admitted Guardiola, who also told BBC Sport that City are "so close" to the title after beating Villa, in his post-match press conference.

"Because United are in top form, winning a lot, and I have the feeling that if they needed to win, they are going to win.

"We deserved to win for the way we have played so far this season to have this advantage, and when you arrive in the last five games depending just on yourself, it is a good boost.

"We know exactly what we need and that is the way we played today. I saw the team, they were committed and knew that we were close.

"After our two defeats in different competitions, we knew how important it was - and for the preparation for the [Carabao Cup] final and for the Champions League game.

City now have a League Cup final to look forward to on Sunday against Tottenham, who sacked Jose Mourinho this week.

Ryan Mason oversaw his first game as Mourinho's temporary successor as a Spurs side without the injured Harry Kane came from behind to beat Southampton 2-1 on Wednesday night. 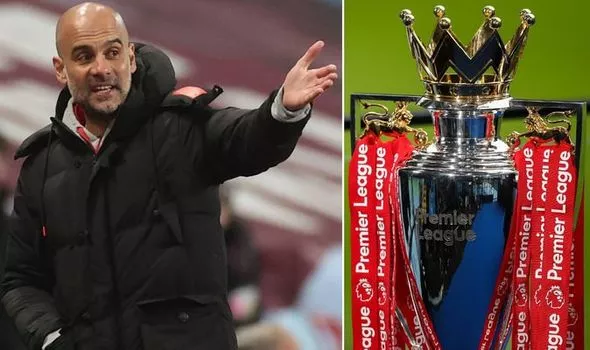