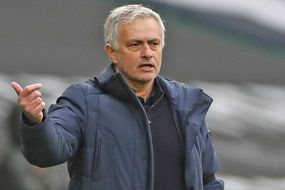 Express Sport reporter Matthew Dunn takes a look at all the biggest talking points from the weekend's Premier League matches.

Express Sport reporter Matthew Dunn has give his take on all of the weekend's biggest talking points from latest round of Premier League fixtures. The biggest shock came at the Etihad Stadium, where league-leaders Manchester City were beaten 2-1 by Leeds United. West Ham kept their top-four hopes alive by beating third-placed Leicester and Trent Alexander-Arnold scored a late winner for Liverpool at home to Aston Villa. The cap it all off, there was entertainment aplenty as Manchester United exacted revenge on Jose Mourinho's Tottenham.

A STEP TOO FOUR FOR CITY

It turns out Manchester City are human after all. Forget the exuberance of Aston Villa’s 7-2 win against Liverpool – it turns out nearly anybody can beat Jurgen Klopp’s team these days.

But for 10-man Leeds to beat Manchester City has to be one of the results of the season.

The lesson is, if you are going to have just two shots over the course of the entire game, make them count. Leeds certainly did.

And the 29 at the other end with only one goal to show for it is the reason Manchester City are not going to win the Quadruple.

Football is a sport, not a science.

The Premier League is wrapped up, sure. But Pep Guardiola has a tricky second leg against Dortmund and then seven more genuinely must-win games to lift all four trophies.

Any one of those opponents could be another 10-man Leeds. It’s why we all keep watching…

MOYES PIPS PEP UNLESS CITY DO THE IMPOSSIBLE

Remember when West Ham’s owners were selling off their brightest future assets and being criticised by their oldest servant for doing so? From top to bottom, the club was in turmoil.

Well, that was the same season in which they find themselves sitting comfortably in a Champions League place with just seven games to go.

The run-in will be intense, but Leicester are the ones who seem caught in the headlights at the moment and perhaps have most to fear.

And if West Ham do hold on to fourth place, a Treble is not enough. Unless Pep Guardiola can land a Quadruple – and he won’t, as discussed above - there should be nobody else in the frame for Manager of the Year than David Moyes.

All focus is on Heung-Min Son today after Tottenham’s latest abject failure in their bid to sneak into the top four.

Ole Gunnar Solskjaer teed that up with his bizarre bed-with-no-dinner analogy, but Mourinho needed no second chance to leap upon it as his get out.

Dismayed that nobody put Solskjaer’s comments to him, he decided to end his press conference by making that the question himself.

Among those questions that were asked…

Spurs have a soft touch that has been there since you first arrived – do you agree?

But Mourinho does not have anything to say on that one – the most crucial question of all right now.

Sorry Jose – in Portugal they say bread is bread and cheese is cheese; here we call a spade a spade – but the rest is just a diversion tactic to disguise Tottenham’s inadequacies right now.

CHIP OFF THE OLE BLOCK

While other clubs have age policies or an overblown view of their status in the game, at least Manchester United have got one thing right.

They are willing to beg Edinson Cavani to sign up for another year.

He was central to their dismantling of Spurs on Sunday and while not the man to lead a title challenge from the front, he is the sort of Plan B a Premier League champion would use extensively to get them over the line.

It has been the worst year possible for a homesick South American to try to establish himself in the toughest league in the world but there is no better man to persuade Cavani he would be cherished in Manchester as a title-winning supersub than Ole Gunnar Solskjaer.

REDS UP FOR THE TAA-SK

So, Liverpool have finally remembered how to win at Anfield after just 115 days and 91 minutes.

Timely enough, given what they have to do against Real Madrid this week.

Can the miracle of Barcelona happen without any fans? And can Trent Alexander-Arnold save his summer with a compelling defensive performance against the Spanish giants as well as an attacking one?

Gareth Southgate was there to watch his winning goal against Aston Villa on Saturday, but this next one could yet be the biggest of the 22-year-old’s career with a place in the Euro 2020 squad still very much at stake.

After the mistake in the first leg that contributed to this current mess, at least the England international looks as though he is up for a challenge.