Rashford has gone ‘through the worst’ of his injury, says Solskjaer

Man United boss Ole Gunnar Solskjaer has suggested that Marcus Rashford has been “managed well” so he has now gone “through the worst” of ... 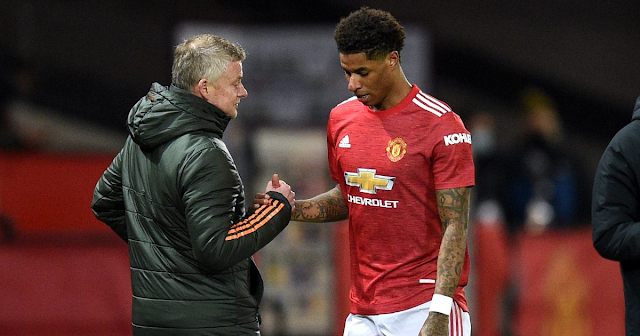 Man United boss Ole Gunnar Solskjaer has suggested that Marcus Rashford has been “managed well” so he has now gone “through the worst” of his injuries.

The 23-year-old withdrew from last month’s England internationals with the issue that he has been managing throughout April.

Rashford has missed chunks of training but the forward has been passed fit for Thursday’s Europa League semi-final first leg against Roma.

“Marcus, yeah, we’ve managed him and we’ve had to manage him for quite a while actually,” Solskjaer said.

“Of course last year with his back, then he had his shoulders, which he’s recovered really well from, and I feel he’s gone through the worst of this foot (issue) as well and he almost played a full game against Leeds.

“He’s available for selection again on Thursday, so I think he’s happy with the progress that he’s made.

“We didn’t lose any anyone after the Leeds game, which was a great preparation for us because it’s a high intensity, very, very difficult game.”

Anthony Martial and Phil Jones remain absent for Man United, but Eric Bailly is available to make his first appearance since the Europa League last-16 first leg draw with AC Milan on March 11.

The Ivory Coast international has recently recovered from Covid-19 and this week signed a new deal until 2024, with the option of a further year.

“Of course Covid, no-one can be guaranteed there so that was a disappointment.

“But I think he’s shown throughout this season that he’s maturing, developing and getting better.

“Of course we want to get the best out of Eric.

“He’s a very highly regarded member of our squad, the boys love him. He’s got such a good heart about him and his performances when he plays, he never lets us down.

“He’s a heart on the sleeve kind of guy and you know you’ll get blocked tackles and aggression, as a defender should do.