Lingard scored a goal after a run from inside his own half to set West Ham on their way to defeat Wolves, to the delight of former Manches... 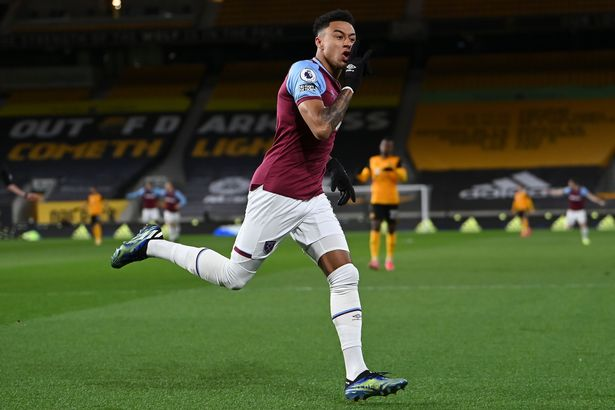 Lingard scored a goal after a run from inside his own half to set West Ham on their way to defeat Wolves, to the delight of former Manchester United team-mates Lukaku and Fernandes

Lingard joined West Ham on loan from the Red Devils in January and has become a key player under David Moyes.

The midfielder was handed his eighth start of his spell at the Hammers for their Premier League trip to Wolverhampton Wanderers on Monday night.

The 28-year-old rewarded Moyes’ continued faith in his abilities, scoring a wondergoal and setting up Jarrod Bowen to score in a 3-2 win.

Lingard scored the sixth goal of his spell at West Ham after just six minutes at Molineux, with the move starting when he collected the ball from Vladimír Coufal inside his own half.

That took him inside the penalty area, before he fired past home keeper Rui Patricio and into the bottom right corner.

After scoring that goal-of-the-season contender, he then played a part in West Ham’s other two goals, producing a Dimitar Berbatov-esque flick on the byline in the lead up to Pablo Fornals’ strike, before then teeing up Bowen.

It was just the latest in a string of impressive performances from Lingard, who has helped Moyes’ men climb into the top four of the Premier League, earning an England call up in the process.

And it is not only Gareth Southgate who has been dazzled by the midfielder’s starring displays, with his former United team-mates also hailing him.

He was left stunned for words by his former United colleague’s wonderful solo goal, tweeting “Damn Jesse…” as Lingard celebrated.

After his man-of-the-match winning performance, Lingard posted a picture of himself celebrating on Instagram with the caption “Back with a bang. Great away win.”

It was on that post that Fernandes, his team-mate for the first half of this season, revealed his delight, commenting “Is on fire” alongside three fire emojis.

Lingard will hope his starring performance will be rewarded with another start when West Ham host Leicester on Sunday.