This seems like such a long time ago, but the main selling point of VAR would be that injustices would be solved on the field and we would... 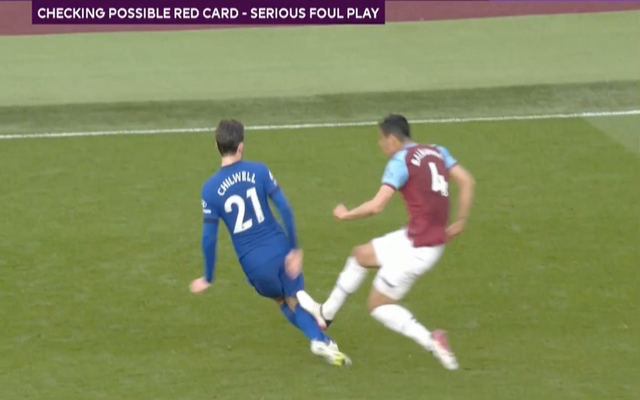 This seems like such a long time ago, but the main selling point of VAR would be that injustices would be solved on the field and we would see a fairer outcome on the pitch.

The reality has seen confusion on a mass scale as those working the technology don’t really seem to know what they are doing, while it’s making refs do some crazy things too.

They do tend to get most of their decisions right, but they are now being forced to second-guess themselves on the field, while being forced to re-watch things at super-slow speed isn’t helping either.

We saw another prime example tonight as Balbuena was sent off for West Ham vs Chelsea, and it doesn’t look like there’s any intent here:

Fabian Balbuena is sent off by referee Chris Kavanagh after he caught Ben Chilwell with his follow through.

One of the main questions here comes down to is this technology actually improving the game? It’s hard to say that it is.

Plenty of fans have had their say on this incident tonight, but it looks like plenty have now just had enough of the terrible officiating with no consequences that we see every week:

Referee should be suspended or demoted for a few weeks for that. Horrendous decision from someone that is either scared to make the right call or doesn’t understand the game

This decision is of exactly the same ilk as the Mctominay "foul" on Son. Ultra slow motion coupled with a horrendous knowledge of playing the game at any decent level. Results in decisions like this.