Manchester United talent James Garner was in fine form once again this evening, as Nottingham Forest got the better of QPR in the Champion... 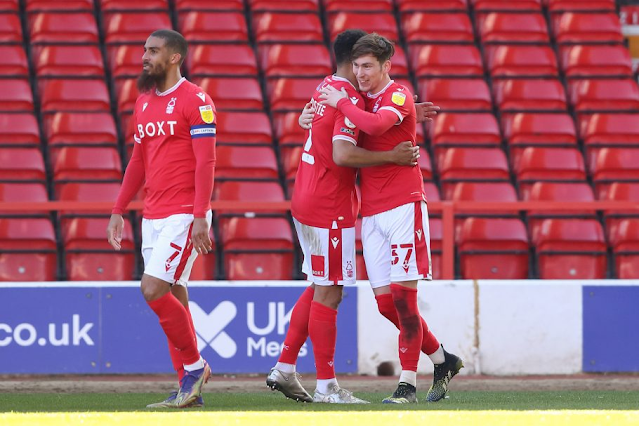 Manchester United talent James Garner was in fine form once again this evening, as Nottingham Forest got the better of QPR in the Championship.

20-year-old Garner has long been viewed as a potential star in the making at Old Trafford.

The English youth international, who has been on United’s books since all the way back in 2009, is a defensive midfielder by trade, but also widely recognised for his abilities on the ball.

Such talents saw Garner go on to line out for the Red Devils’ first-team squad on 6 occasions last season, including a trio of starts in the Europa League.

With the likes of Paul Pogba, Scott McTominay, Fred and Donny van de Beek ahead of the youngster in Ole Gunnar Solskjaer’s midfield pecking order, though, the decision was eventually made last summer to farm Garner out on loan.

The Merseyside native subsequently went on to link up with Championship outfit Watford, where he initially impressed under Vladimir Ivic.

Following Ivic’s sacking, and the swift appointment of Xisco Munoz, though, Garner fell out of favour, resulting in his loan deal at Vicarage Road being terminated.

It did not take long, however, for the midfielder to find a new club, as Nottingham Forest, evidently impressed by what they had seen of the United talent over the opening half of the campaign, swooped to secure Garner’s services during the winter window.

And to say that his Nottingham switch has since proven a success would be putting it lightly.

Garner has gone on to play a starring role for Chris Hughton’s men, dominating from his deep-lying midfield berth with equal grit and guile.

All told, the 20-year-old has notched starts in 13 of Forest’s last 14 Championship outings.

Garner back on target

As outlined above, meanwhile, Garner’s latest impressive appearance came this afternoon, as the Reds welcomed QPR to the City Ground.

A fine display at both ends, when all was said and done, eventually saw Forest come away with all 3 points.

After Alex Mighten opened the game’s scoring on the stroke of the interval, Lewis Grabban made it two just past the hour-mark.

It was the hosts’ 3rd of the game, courtesy of that man Garner, though, which saw the Manchester United starlet go on to steal the headlines once more.

After taking responsibility of a free-kick on the left side, the all-action midfielder directed a stunning bending effort beyond the clutches of Seny Dieng into the far top corner.

Garner’s strike, which marked his 2nd in two games since the international break, came amid another superb all-round display on the part of the Englishman, as showcased by the stat-line below: