Another matchday and more abhorrent racial abuse suffered by one of our players. This has again been reported to the platforms and we shall now undertake a full review alongside the Premier League to determine the most effective action moving forward.

We stand with you, Sonny. pic.twitter.com/fNBpSykJJo

Son then scored the opening goal of the game three minutes later.

Manchester United boss Ole Gunnar Solskjaer spoke out after the game, criticising Son and saying that “the game is gone” after the decision to disallow the goal.

“If that was my son and he stays down and he needs his mates to help him up, he doesn’t get food because that’s embarrassing,” Solskjaer said after the game.

Solskjaer said that the referee had been conned by Son

Sonny has his say on today's game.#THFC ⚪️ #COYS pic.twitter.com/koVOKGQZ8P

“If that’s a clear and obvious error, it’s an obvious error he had to look at it. It was a perfectly good goal. They are conned [by Son]. We weren’t conned, the referee was.

“Unfortunately the referee decided we are not playing football or VAR decided probably. I’m absolutely shocked if that is a foul.”

Spurs boss Jose Mourinho did not mince his words in response to Solskjaer, the man who replaced him in charge of the Old Trafford side.

“First of all, let me tell you something. I’m very, very surprised that after the comments that Ole made on Sonny, you don’t ask me about it,” Mourinho said.

“Because - and I told Ole already this because I met him just a few minutes ago - if it’s me, telling that player A, B or C from another club, if it was my son I wouldn’t give him dinner tonight, what would be the reaction of that?

“It’s very, very sad. I think it’s really sad that you don’t ask me about that. It’s sad you don’t have the moral honesty to treat me the same way as you treat others.

No problem with a bit of deflection from a manager after their team loses but taking Solskjaer’s comments literally here is a new low from Mourinho. As pathetic as it is hilarious pic.twitter.com/PSzKQQ4B05

“In relation to that, I just want to say that Sonny is very lucky that his father is a better person than Ole. I am a father. I think as a father you have always to feed your kids. Doesn’t matter what they do. If you have to steal to feed your kids, you steal.

“I’m very, very disappointed. As we say in Portugal, bread is bread and cheese is cheese. I told Ole already what I think about his comments and I’m very disappointed that in five, six, seven questions you ignore the dimensions of that comment.”

Footballers have increasingly become the target of racial abuse online, with English Championship side Swansea City leading a social media boycott that has been followed by Scottish champions Rangers.

Former Arsenal player Thierry Henry has also stepped back from social media because of racism in a move that several current players, including Son’s Spurs teammate Gareth Bale. have said they would consider. 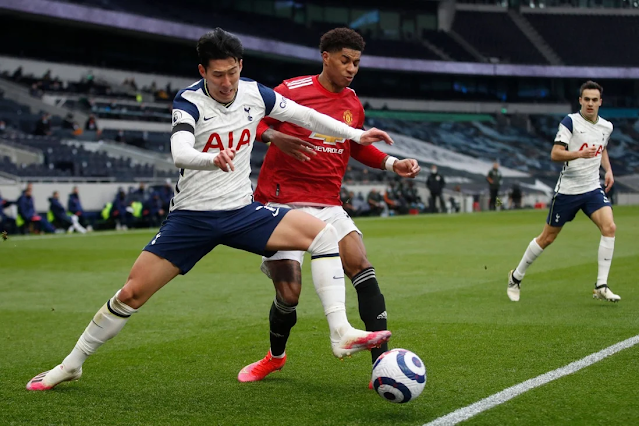