Mason Greenwood had a difficult afternoon at centre forward for United at Leeds Man Utd were held to a goalless draw by Leeds United in th...

Man Utd were held to a goalless draw by Leeds United in the Premier League and it was a poor quality game at Elland Road.

It was a story of missed chances for Manchester United at Leeds, the kind of chances that could have resulted in all three points and the opportunities presented to Daniel James and Mason Greenwood, who were the big beneficiaries of Ole Gunnar Solskjaer's rotation.

On another day United could have secured all three points at Elland Road, with Marcus Rashford, Bruno Fernandes and James all missing very presentable opportunities.

But it was a performance lacking fizz and intensity and while United were the better side that wasn't a claim worth the paper it was written on in a game that was devoid of real quality.

In leaving Paul Pogba on the bench Solskjaer turned to Daniel James, but he flickered in and out of the game and showed his lack of composure in the final third on a couple of occasions, failing to get a shot away when presented with a good chance and then getting in a mix-up with Fernandes when both were in on goal.

And in the absence of Edinson Cavani it was Mason Greenwood who began as the centre forward this week, just over a week since Solskjaer had said he was "a few years at least" from being able to play in that position in the Premier League. If he was hoping to suggest a quicker switch might be on the timetable then it wasn't to be. By the end Greenwood is back on the right having struggled to get in the game centrally.

A feature of United's commanding win against Leeds at Old Trafford was Scott McTominay's driving runs forward, but with the Scot short of space to run into at Elland Road it was Harry Maguire who was often the spare man.

Maguire has shown at various times this season that he is happy to carry the ball into enemy territory, something he did a lot in the draw at West Brom, although that was an occasion when United's attack badly misfired.

In Yorkshire Maguire realised he had space to drive into and was regularly driving into it, surging past a man or two in the process to try and disrupt Leeds' man-marking system.

There was also an excellent pass to set Marcus Rashford free on the left, before Luke Ayling's crude challenge brought him down. Maguire might not be everyone's idea of a playmaking centre back, but he has shown he's happy to take the initiative if required.

The first chance of this game fell to Rashford and while the offside review by VAR might have been tight, the United forward was unable to call the officials at Stockley Park into action.

His first touch to control Aaron Wan-Bissaka's long ball took him wide of the goal and then his attempted finish was scuffed wide. It's the type of miss that can happen to every striker but you wonder if it might take Rashford a little while to get into games at the moment, given he is hardly training in the week.

United had a free week between the win against Burnley and this trip to Leeds but Rashford only trained once, on Saturday, and as he looks to manage a foot injury it's understandable he might be finding his feet early in the game having kept his boots off for most of the week.

This is relevant to every game played behind closed doors but rarely can a Leeds vs Manchester United match at Elland Road have felt so flat. The day turnstiles open again cannot come soon enough.

In a first-half lacking quality, it was noticeable just how quiet it was, even those staff in attendance for both clubs were fairly muted, perhaps a combination of the spring sunshine and the fact there was little riding on the game for both sides, with United fairly secure in second and Leeds nicely settled into mid-table.

Had Elland Road been full to capacity, with a baying home crowd embracing the return of this fierce fixture, then it's hard to imagine the game being played at the same sedate tempo.

The only people grateful that this fixture was played out to the sound of silence was probably the Glazer family, although the absence of supporters didn't prevent another protest against their ownership of United.

After the protests outside Old Trafford on Saturday this time it was a banner flown over Elland Road carrying the message "£2bn stolen #GlazersOut".

Solskjaer said before this game he was confident his players could ignore any distractions in the terms of protests, but it seems clear from the last few days that when crowds return to Old Trafford protests against the owners are likely. 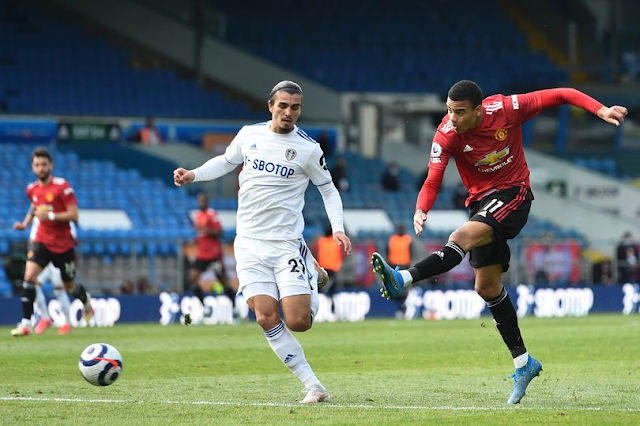