In the 32nd minute of this evening’s Premier League tie between Sheffield United and Arsenal, the Gunners did Arsene Wenger proud with a stu... 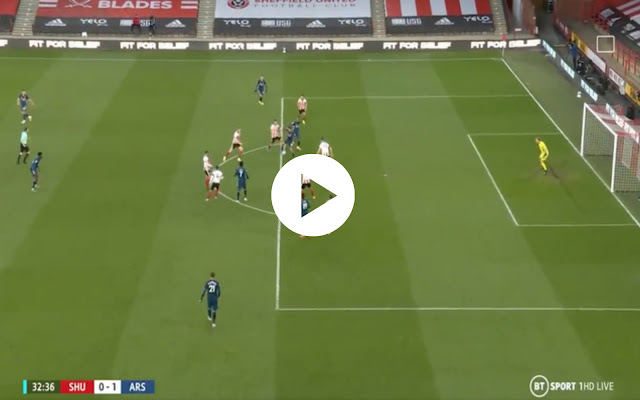 In the 32nd minute of this evening’s Premier League tie between Sheffield United and Arsenal, the Gunners did Arsene Wenger proud with a stunning team move that led to Alexandre Lacazette scoring.

Real Madrid loanee Dani Ceballos slotted it across to Nicolas Pepe when 45 yards out, with Ivorian quickly firing the ball out wide to Calum Chambers…

Chambers composed himself as he controlled the ball and sent it back into midfield, with marquee signing Thomas Partey picking it up and passing it into a screaming Lacazette.

Lacazette slotted it to Bukayo Saka to bypass some of the heat around the crowded edge of the box, Saka’s one-two attempt was a little off, but thankfully Ceballos was on hand with a moment of magic…

Ceballos produced an amazing back-heel flick to send it through to Lacazette, who showed ice-cold composure to tuck the ball into the back of the net.

Look at that passing 😍

An absolutely brilliant goal from Arsenal!

Alexandre Lacazette with the clinical finish for his 14th of the season. pic.twitter.com/vJdXXlmtSI

Wengeresque goal and Hernryesque finish from Lacazette. What a wonderful move by the lads, why can't we do this every week ? 🔥😍 #SHUARS https://t.co/T3YxfiVsdE

This might just be the most well-worked goal that the Gunners have scored all season, Mikel Arteta’s philosophy at it’s best.