Video: Bruno Fernandes gets amazing luck with penalty award and poor goalkeeping to put Man United 2-0 up against Granada

The actual laws of the game dictate that it just needs to be a foul in the box for a penalty to be awarded, but it generally results in a go... 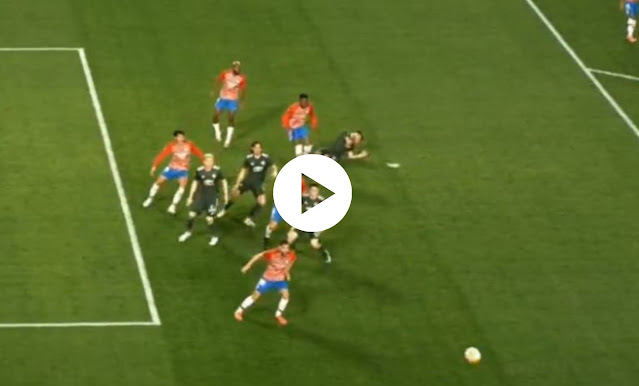 The actual laws of the game dictate that it just needs to be a foul in the box for a penalty to be awarded, but it generally results in a goal so it leads to a situation where we almost think that it needs to be some kind of “super-foul” to result in a penalty being given.

There was a ton of confusion in Man United’s game against Granada tonight as the referee pointed to the spot, and you could tell that players from both sides didn’t have a clue what was going on:

It’s such a strange one because the defender does make contact with Bruno Fernandes and it probably is a foul, but it’s hard not to think of this as a fortunate award simply because you never see it given.

There will be complaints about VAR but there’s not much it can do here – The ref has adjudged that it’s a foul and contact is made so it’s not a “clear and obvious” error so it stood.

The keeper then has a nightmare with the actual taking of the kick as he needs to be saving that, but Man United surely have one foot in the semis now.

There’s an interesting discussion to be had here because you can rightfully suggest that there will be multiple penalties a game if these are always picked up on, but all we really want as fans is to see some consistency in the game and this does look like an unusual award.