Chelsea loanee Fikayo Tomori has impressed during his time on loan with AC Milan, but he’s still a young, raw centre-back, and it shows. T... 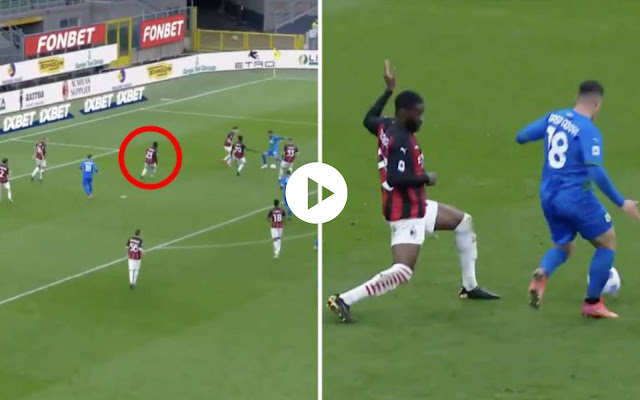 Chelsea loanee Fikayo Tomori has impressed during his time on loan with AC Milan, but he’s still a young, raw centre-back, and it shows.

Tomori was not even making the match-day squad under Frank Lampard, so had little choice but to pursue a departure in January, else he would have found himself wasting a potentially pivotal year in his development among the reserves.

Ordinarily, players who can’t get minutes for love nor money don’t land themselves loan moves to clubs of AC Milan, but Tomori did, which is testament to just how good a defender he could grow into.

Considering how good he’s been for the Rossoneri thus far, it’d come as no surprise if they looked to purchase him outright this summer, but there’s still work to be done from Tomori’s perspective, especially if he is to be playing Champions League football with AC Milan next term.

Milan lost 2-1 at home to Sassuolo this evening, with Giacomo Raspadori netting both goals. For his first, Tomori was dragged out of position to challenge Raspadori, then failed to track his run, allowing him a shot at goal.

With less than 15 minutes remaining, Milan could be looking at some costly dropped points 👀 pic.twitter.com/9xvAniYlNd

Just to prove once and for all that he had the beating of the Chelsea man, Raspadori squared up Tomori, dribbled past him and found the back of the net, scoring Sassuolo’s second and condemning Milan to defeat.

Sassuolo turn the game on its head and lead Milan 2-1 at San Siro 👏 pic.twitter.com/qGofEyktQG

An evening to forget for young Fikayo.