Just two minutes into the second-half of this afternoon’s Premier League tie between West Ham and Leicester, the Hammers put the sword to th... 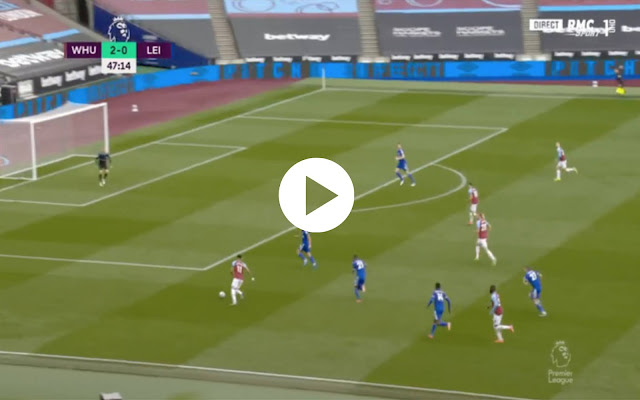 Just two minutes into the second-half of this afternoon’s Premier League tie between West Ham and Leicester, the Hammers put the sword to the Foxes once again to make it 3-0.

In-form striker and reigning top-flight Player of the Month Kelechi Iheanacho came short for the ball and ultimately lost possession as he was pressured by the Hammers.

The ball spilled out to Arthur Masuaku and the returning left-back sent it through to Jesse Lingard with a lovely pass, the Man United loanee composed himself before slotting it across to Tomas Soucek.

Soucek carried it into the box before slipping it to Jarrod Bowen, the attacking midfielder showed ice-cold instinct with a touch and killer finish, despite being met with a late block attempt.

Lingard has been unstoppable for the East London outfit today, extending the fine form he’s shown since he joined on loan, bagging a stunner to open the scoring and later hitting Leicester on the break.

THE HAMMERS ARE FLYING! 🛫

David Moyes’ high-flying side are making the battle for European qualification much more intense, the Hammers really deserve to be in one of the continental competitions next season.