In the 40th minute of this evening’s Premier League tie between Aston Villa and Manchester City, Pep Guardiola’s side were dealt a massive... 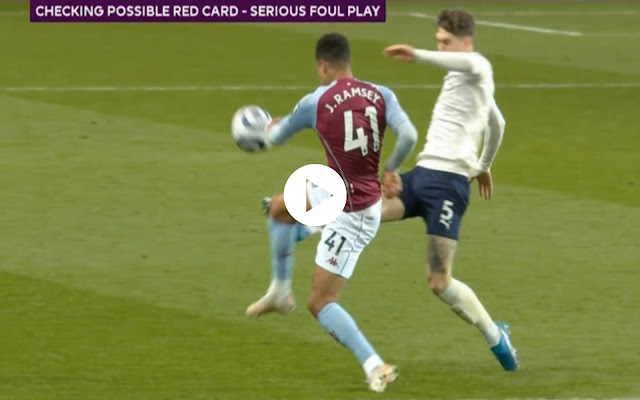 In the 40th minute of this evening’s Premier League tie between Aston Villa and Manchester City, Pep Guardiola’s side were dealt a massive blow just minutes after they came from behind to take the lead.

Aston Villa won the ball back in their own defensive third before tonight’s goalscorer, John McGinn, launched a threatening ball forward, which set starlet Jacob Ramsey on a dangerous path.

Ramsey showed awareness well above his age as he burst onto the loose ball, whilst John Stones was racing to get there first, and knocked it away from the centre-back.

That play from the 19-year-old wasn’t enough for Ramsey to steer completely clear of Stones though, as the defender’s boot came crashing into the talent with a reckless high challenge at full speed.

A VAR review followed and Stones was rightfully shown a straight red card, to rub salt into the wounds it comes in front of England manager Gareth Southgate, who is sat in the stands of his former club.

Stones’ early exit from the encounter will not just threaten the side’s chances of three points today, but also Pep Guardiola’s plans for the League Cup final against Spurs this weekend, as well as the rotation cycle he will have planned out before they face Paris Saint-Germain in the Champions League.

Stones is shown his marching orders after a high and reckless challenge on Ramsey in front of England boss Gareth Southgate!