Video: Jose Mourinho insists Manchester United star should have been sent off for elbow to the face

Speaking to  Sky Sports  post-match, Jose Mourinho has revealed his belief that Paul Pogba should have been sent off during Tottenham’s lo... 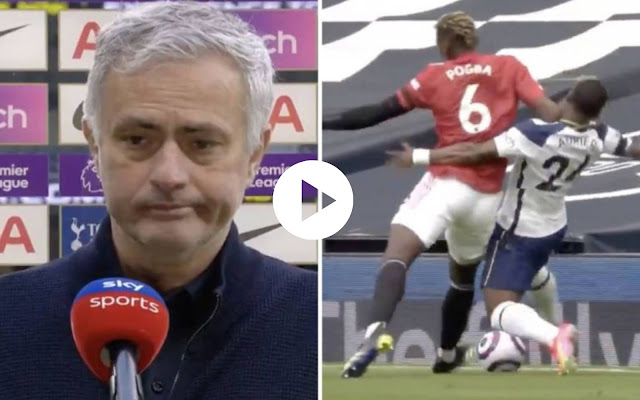 Speaking to Sky Sports post-match, Jose Mourinho has revealed his belief that Paul Pogba should have been sent off during Tottenham’s loss to Manchester United.

Spurs headed into today’s game knowing that they would have a seriously uphill task to qualify for the Champions League if they were not to beat Man United at the Tottenham Hotspur Stadium.

However, despite having taken the lead through Heung-min Son, Tottenham finished the contest on the receiving end of a 3-1 beating, one which all-but ended their top four hopes.

Mourinho, who is hardly renown for being classy in defeat, had a bone to pick during his post-match interview with Sky Sports, during which he claimed that Pogba should have seen red.

Pogba’s elbow did make contact with the face of Serge Aurier, and in the age of VAR, where the games are pedantically officiated and every incident is watched back on multiple occasions in slow-mo, you wouldn’t have been surprised if the Man United midfielder was sent off for this…

🔴 "I don't understand anything anymore!"

🔴 "Maybe Pogba should get a red card for an elbow."