With Manchester United fans staging a protest outside Old Trafford against the Glazer family’s ownership of the side, a disturbing incident ... 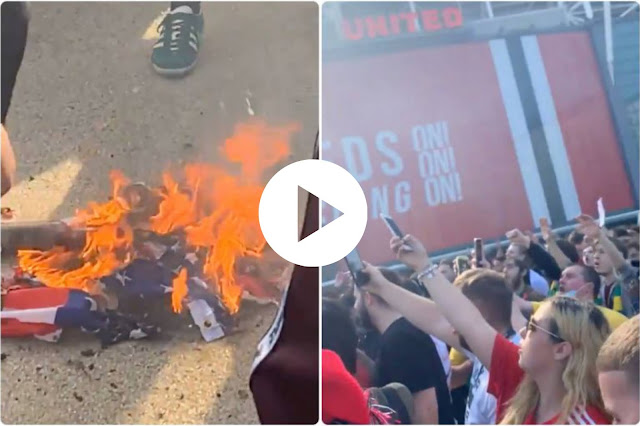 With Manchester United fans staging a protest outside Old Trafford against the Glazer family’s ownership of the side, a disturbing incident has occurred.

Large sections of the fanbase were already at odds with the Glazers owing to a lack of investment since their takeover, as well as the nature of the deal, in regards to certain loans and dividends.

It now appears that absolutely no Red Devils supporter – at least the ones hailing from England, want the American family out of the club after the European Super League fiasco.

The ditched plans resembled and were widely presented as Americanisation of football, to that end, protesting fans have now set fire to a USA flag outside Old Trafford.

Footage shows one supporter setting the flag alight whilst all those around it chanted passionately and filmed the moment on their smartphones.

It will be interesting to see how the club handle this matter, it’s certainly not something that their American fanbase will like to see, as well as other commercial sponsors and partners.

This can’t be written off as something that took place in the heat of the moment, someone in Manchester has went out and specifically brought in an American flag for this very reason.

As much as the European Super League would have represented a major league American sports model, burning the nation’s flag is perhaps a step too far and a disrespectful action that could divide the club’s supporters, as well as sparking outrage across the 50 states.

However the people involved decide to present this, it simply attacks every American and USA-based supporter, who haven’t done anything wrong unlike the Glazers.