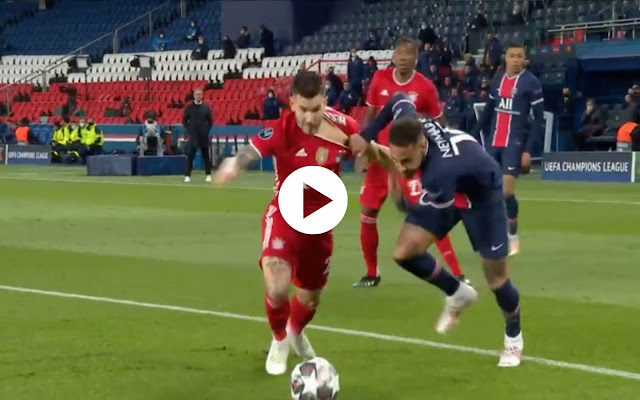 In the 27th minute of tonight’s second-leg Champions League knockout tie between Paris Saint-Germain and Bayern Munich, Neymar produced a disgusting moment of simulation play to coerce a penalty…

The ball was slipped into the box for the Brazilian superstar, where he was pressured by Lucas Hernandez.

Whilst Neymar’s silky ball control may have been the main thing to catch people’s eyes, take a look at the attacker’s arms, the attacker pulled at Hernandez’s shirt with some force, almost ripping it.

If that wasn’t bad enough, when Neymar’s energy was matched by Hernandez becoming equally physical – the star wheeled away, maintaining a tug on the shirt, before throwing himself to the floor.

The 29-year-old then appealed for a penalty in a unfortunate show of what the beautiful game has come to these days, the protests were rightfully ignored but Neymar somehow avoided punishment.

No, just before Neymar went down for the penalty claim, look at how he was dragging Lucas Hernandez to try and reclaim the ball (right decision): pic.twitter.com/mUVkYFqeWG

Neymar really lets himself down with moments like this, it’s no surprise that many football fans don’t respect or admire the attacker when he’s behind deceitful tricks like this that spoil the beautiful game.