In the 24th minute of tonight’s Champions League tie between Liverpool and Real Madrid, a fight looked to be on the brink of erupting when A... 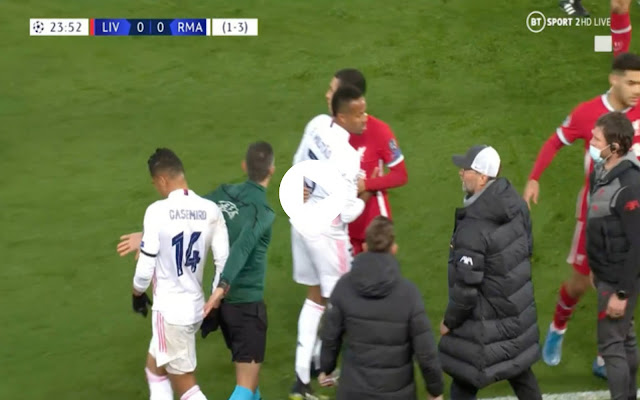 In the 24th minute of tonight’s Champions League tie between Liverpool and Real Madrid, a fight looked to be on the brink of erupting when Andy Robertson took serious offence to a foul from Casemiro.

Casemiro cut down James Milner with a hard slide tackle right in front of Jurgen Klopp, which we also wrote about here, sparking a furious reaction from Robertson.

Robertson ran across to Casemiro, screaming at the midfielder and squaring up with the Brazilian, that’s when Roberto Firmino sprinted onto the scene to try and shut down the possibility of a fight.

Just as Firmino was going to put an arm across international teammate Casemiro, the Reds striker stopped another one of his fellow countryman in his tracks, as Eder Militao was bursting onto the scene.

Firmino embraced his old pal, who he’s enjoyed moments like this with, in a clever move that stopped the situation from spiralling out of control.

Some Liverpool fans might not like this, instead preferring that the Reds really got into Los Blancos, but this was a smart intervention from Firmino that avoided a potential fight that could’ve seen players come away with unnecessary cards.