Valencia’s clash with Cadiz in La Liga has been abandoned after the players walked off the field in solidarity with Mouctar Diakhaby after a... 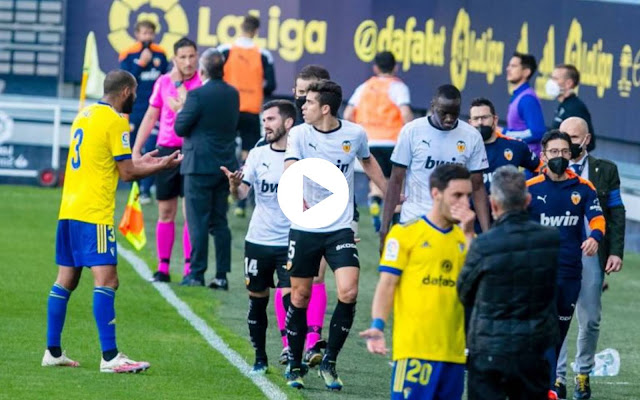 Valencia’s clash with Cadiz in La Liga has been abandoned after the players walked off the field in solidarity with Mouctar Diakhaby after an alleged racist incident.

The La Liga outfit have taken to Twitter to confirm their reasoning for leaving the field, as well as showing their support for Mouctar Diakhaby, who was the victim of the alleged racist abuse.

We offer our complete backing to @Diakhaby_5

The player, who had received a racial insult, requested that his teammates return to the pitch.

WE SUPPORT YOU MOUCTAR

The accused Cadiz player who allegedly made the racist remark which resulted in the walk-off was Juan Cala. It was not initially evident what had occurred out on the field of play, but Diakhaby could be seen emotionally protesting to the match official before the players left the pitch.

The Valencia players have walked off the pitch at the Carranza 🦇

Mouctar Diakhaby was visibly angry after an altercation with Cadiz's Juan Cala, and ultimately left the pitch with his teammates following behind him pic.twitter.com/3XKvm5Y9dc

The game did get back underway after some time had passed, with Diakhaby have been substituted, with either himself or his manager likely to have deemed him not to be in the right frame of mind to continue. Cala remained on the pitch for Cadiz.

While the referee was not able to take action, with the audio not sufficient to be reviewed by VAR, you have to imagine there will be an inquest into what has happened today and what exactly Cala said to Diakhaby.