In the 84th minute of this evening’s top-flight tie between Sheffield United and Arsenal, Thomas Partey produced his best play since joining... 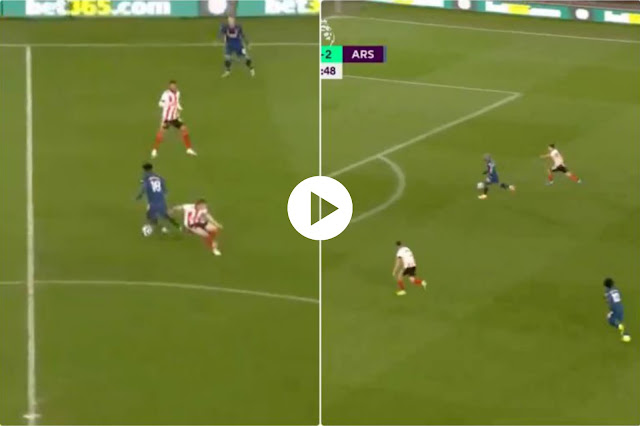 In the 84th minute of this evening’s top-flight tie between Sheffield United and Arsenal, Thomas Partey produced his best play since joining the Premier League to make it a 3-0 victory to the Gunners.

Pablo Mari sent it into the central midfielder, who was facing pressure from Ben Osborn. Partey effortlessly glided past the Blades ace with a wonderful dummy-cum-turn.

The drop of the shoulder wasn’t the pinnacle for the Ghanaian star though, Partey then sent the ball through to Alexandre Lacazette with an amazing pass that split the Sheffield United defence.

Lacazette showed brilliant composure as he slowed down and waited to strike the ball first-time, in a tidy finish that tucked the ball into the bottom left corner, sending Aaron Ramsdale the wrong way.

The Arsenal centre-forward has been superb tonight, proving that he deserves to lead the line ahead of captain Pierre-Emerick Aubameyang, here is the Frenchman’s clinical first goal of the night.

The turn from Thomas Partey 💫

The finish from Alexandre Lacazette 👏

Mikel Arteta will be absolutely delighted with the team’s overall performance this evening, and especially with such a wonderful contribution from the side’s marquee signing.