Video: Unbelievable scenes as Sevilla and Granada players are dragged back onto pitch after full-time after stoppage time error

There were bizarre scenes in the Sevilla vs Granada fixture today, with the referee blowing his whistle for full-time early, before dragging... 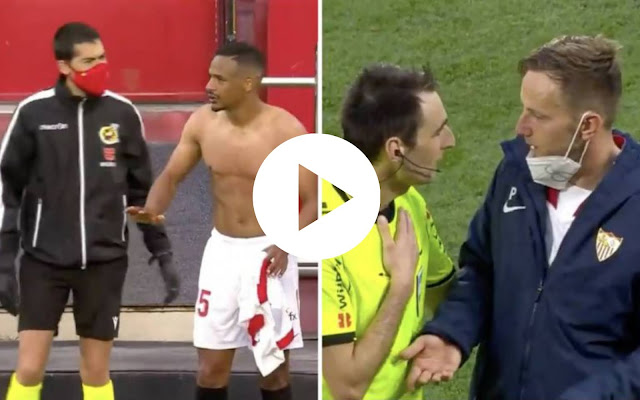 There were bizarre scenes in the Sevilla vs Granada fixture today, with the referee blowing his whistle for full-time early, before dragging the teams out of their respective dressing rooms to finish stoppage time.

In what has been a truly bizarre week for football, this might just top the lot.

The referee in charge of this fixture between title-chasing Sevilla and Granada put his whistle to his lips when the clock hit 93 minutes, not realising that there were actually four minutes added on at the end of the contest.

The players did their usual handshaking, embracing and gentle cantering off the field, before being told that they had to get back into position to complete the final minute of added time. No, we’re not joking.

The referee blew the final whistle 93 minutes, having indicated four of stoppage time in Sevilla-Granada and has now called the players, who have all left the pitch and some in the changing rooms, to come back and play the final minute

Players had their shirts off, boots off, shin pads out of their socks – they were ready to get home, stick the tele on and enjoy what remains of their Sunday evening, but the referee had other ideas.

The referee for Sevilla vs Granada blew the full-time whistle at the 93rd minute mark. He then realised there was four minutes added time, then proceeded to order the players back on to the pitch to play the final minute...