Back in 2015, one of Swansea City's young mascots went viral for his reaction to seeing Wayne Rooney lining up for Manchester United. ... 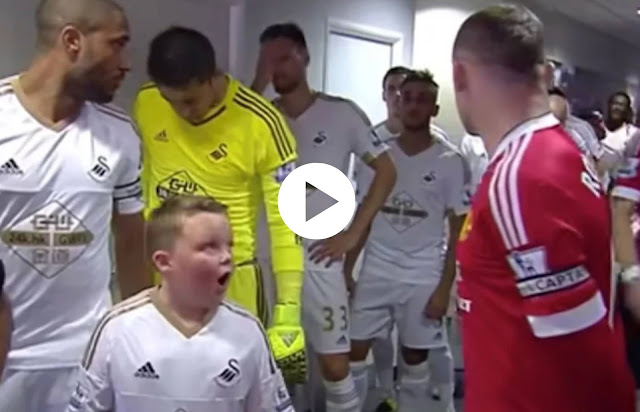 Back in 2015, one of Swansea City's young mascots went viral for his reaction to seeing Wayne Rooney lining up for Manchester United.

Tomos was just nine years old at the time and he was meant to be walking out alongside his own club captain, Ashley Williams.

Now that's exciting enough for any young football fan - but the shock of seeing Rooney in the flesh was understandably a bit too much.

Tomos's drop quite literally dropped and it was recently named one of the 100 funniest moments in Premier League history.

In case you've forgotten the iconic moment, you can relive it below:

The fact he wasn't even a United fan made it all the more entertaining.

Nonetheless, the club's sponsors Chevrolet later made him an ambassador for the day.

That meant that six months on, the youngster was invited to United's training ground, where he met up with Rooney once again.

This time, he was a little more composed and looked pretty dapper in a suit and tie.

The former England skipper showed him around Carrington on his own personal tour. Swansea fan or not, that must have been an incredible moment for Tomos.

The young Welshman wasn't the first mascot to go become an internet hit.

Back in February, we looked back at the story of Jake Nickless, the young Chelsea mascot who pranked Steven Gerrard in the tunnel.

Nickless ended up becoming a semi-pro footballer in his own right, signing for Billericay Town, who were at the time managed by former Premier League midfielder Jamie O'Hara.

Being a mascot for a top-flight mascot is an unforgettable experience for any fan, but especially the ones who really make the most of their moment in the spotlight.