Erling Haaland’s first impression of the inside of the Etihad is sure to give Manchester City fans hope of signing him this summer. With S... 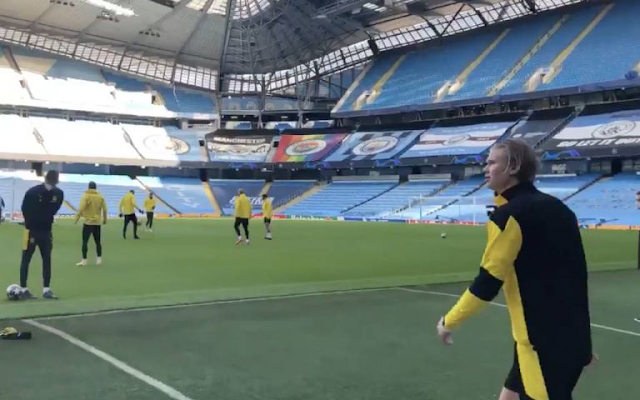 Erling Haaland’s first impression of the inside of the Etihad is sure to give Manchester City fans hope of signing him this summer.

With Sergio Aguero already confirmed to be out the door this summer, with the City legend’s contract coming to an end, Pep Guardiola’s men are going to find themselves in need of a new centre-forward.

As reported by the BBC, Haaland has been a well-reported target for Man City, with Pep Guardiola’s comments on the player, as detailed in that same report, suggesting that the champions-elect could be in the running.

“The only thing I can say is that, with his age, Haaland is an exceptional striker.”

“Maybe in the future [spending more than £100m on one player] is going to happen if they decide it is necessary to improve the team for the next five, 10 years, for many reasons. But so far the club, the organisation, the CEO, the sporting director decided not to do it and that’s why they didn’t do it.”

City are already far and away the best team in the country, so the prospect of them adding Haaland to their forward line is one that no rival fan wishes to acknowledge.

However, they have the necessary financial firepower, with Guardiola, as well as the club’s ambitions domestically and in Europe, providing serious pull when pursuing transfer targets.

Whether or not Haaland sees City as the next step in his career remains to be seen, but one thing’s for sure, he’s a fan of the club’s impressive Etihad Stadium.

As Haaland stepped out onto the turf to train for Dortmund ahead of their Champions League tie with City, he could be heard saying that the stadium is “beautiful”.