Aston Villa's Ollie Watkins (right) walks past manager Dean Smith after being sent off during the Premier League match at Villa Park, ...

If ever a match was a microcosm of Villa’s season it was this one.

A first half of promise gave way to a second half of frustration and the realisation for all their undoubted progress Dean Smith’s team still have an awfully long way to go.

There is no result which would have better underlined the fact Villa are a club on the rise than beating Manchester United. Instead, their wait for a home Premier League victory over the Red Devils will stretch into a 27th year after a 3-1 defeat which bore some all-too-familiar hallmarks of failures past, most particularly a blown lead, questionable officiating and the nagging sense of an opportunity missed.

This was the 22nd time United have arrived at Villa Park since 1995 and the 22nd time they have departed unbeaten. Villa’s overall top-flight record against them in the last quarter of a century now stands at one win in 45.

So accustomed have supporters become to the narrative, it is unlikely they allowed themselves to get too excited when Bertrand Traore fired their team into a 24th-minute lead.

Pessimism always feels the better option in Villa-United fixtures and so it proved again as goals from Bruno Fernandes, Mason Greenwood and Edinson Cavani completed a second-half turnaround. It was the ninth occasion United had come from behind to salvage a result during their quarter century of dominance at Villa Park.

Smith directed most of his post-match ire at referee Chris Kavanagh, most particularly at his decision to award United the penalty from which Fernandes levelled the scores, after a Douglas Luiz challenge had prompted Paul Pogba to tumble in the box. Kavanagh then further enraged the Villa boss by showing Ollie Watkins a second yellow card after deciding the striker was trying to buy a penalty moments after Cavani had made it 3-1.

Smith had a point. The judgement on Watkins, who never appealed for a foul and who did seem to be contacted by goalkeeper Dean Henderson, seemed rather harsh. Though none of the big second-half decisions might be considered particularly egregious, neither did they subtract from the sense if there is any doubt the benefit usually falls in United’s favour. On that subject, Villa might consider themselves unfortunate not to have been awarded a spot-kick of their own when Greenwood blocked a Luiz header at close range with arms flailing.

But while there might be a wider discussion to be had on just how easily some penalties are "won" in the modern era, or the inconsistencies in how simulation is punished, Villa should know by now how the game is played.

Luiz, in truth, was naive in the extreme to lunge forward and make any contact with Pogba, even more so when you throw in the fact the Brazilian midfielder conceded a penalty for fouling the same player in January’s reverse fixture at Old Trafford. To be tricked once is unfortunate, twice is simply careless. Of the three penalties United have now been awarded in their last three matches against Villa – all, incidentally, scored by Fernandes – yesterday’s was the least controversial.

From Villa’s perspective, it was in the minutes after United had drawn level the game was lost. Though Smith’s team are built of a far sturdier mentality this season, there are still lapses. Not for the first time their response to going behind was poor and within four minutes they had conceded again, Greenwood too easily escaping Tyrone Mings and firing a left-footed finish underneath the hand of Emiliano Martinez. From there it always felt an uphill struggle for the hosts.

This was the fifth match running Villa had taken the lead but only one of those has ended in victory. This was the third to finish in defeat and with the other two having been against Liverpool and Manchester City, it prompts the question as to whether Smith’s men might still be lacking a little belief when in tight encounters against the top teams?

Considering how far Villa have come in such a short space of time, it would be understandable. They remain very much a work in progress and there is certainly no shame in losing to a United team who have now come from behind to win 10 Premier League matches this season, a new record. Add in the fact Ole Gunnar Solskjaer’s men are still unbeaten away from home this term and perhaps it was always fanciful to think they might stumble at a venue where they have not lost during this millennium.

Still, in the first half it looked like there might be a chance. Frustrating nature of the result aside, this was not a day without positives for Villa, the biggest being the continuation of their recent attacking renaissance.

While it was Anwar El Ghazi who grabbed the plaudits with his match-winner at Everton a week previously, here his fellow winger Traore underlined his own return to form with a terrific finish to bag a sixth Premier League goal of the season.

The Burkina Faso international had already looked lively in the early stages, playing his part in Villa’s attacking press which caused considerable problems for United’s backline. When fed by Luiz on the edge of the opposition box, Traore’s attempt to turn Victor Lindelof looked to have ended in failure only for the defender to miss the clearance and with one swing of his left boot the Villa man sent the ball arrowing high inside the far post, out of Henderson’s grasp.

Watkins and El Ghazi then failed to make clean connections when shooting from the edge of the box either side of half-time, while the introductions of Wesley and Keinan Davis off the bench added late energy and brief hope of a comeback before Cavani settled matters.

It is Davis, who in the context of what had gone before was arguably too honest in staying on his feet when challenged in the box by Lindelof, that will now get an extended run-out for Thursday’s visit of Everton with Watkins suspended.

Prior to his dismissal, the latter had played every single minute of Villa’s Premier League season and, ending aside, this was another performance which demonstrated why he is in with a decent shout of making Gareth Southgate’s Euro 2020 squad.

Watkins will return at Crystal Palace on Sunday, as might Jack Grealish. For Villa there is still plenty to enjoy, even if victory against United remains elusive. 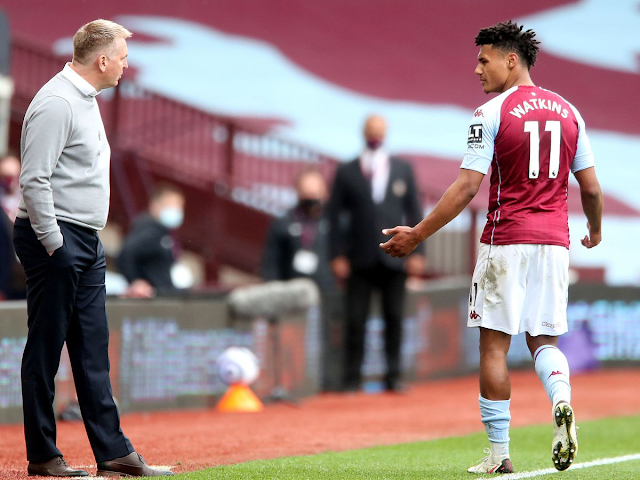