Bruno Fernandes (left) believes that Cristiano Ronaldo (right) is the greatest player of all time The Portuguese star (right) lifted the l...

Fernandes, 26, revealed the debate has been going on for some time now and appears to have created a divide between the Portuguese and Brazilian contingents.

United's talisman also said the trio also argue over who was better between Luis Figo and Rivaldo.

Answering questions from fans on United's official website, Fernandes said: 'They [Fred and Telles] always talk about who is the best player in the world, in history, blah blah….

'We always fight because they say Pele was the best in the history of football and I'm talking and I put Cristiano in the middle, of course.

'For me, Cristiano and [Lionel] Messi, I always say, both make history for many years and they were capable of being at the top for many years.

And, of course, the same as me, they have never seen Pele play so they can't say he was the best because they never saw him.

'They say it because they're Brazilian and, in Brazil, they say it.

'I think Pele is one of the best in the world because I hear people talking about him and I've seen some history and some videos and you watch and everyone can see [Diego] Maradona, Eusebio and people talk about Pele as being the best of all time.

'So, for me as a Portuguese, I always defend my players. It doesn't matter if I like them or not, I defend the Portuguese players every time.

'So this is a fight between Brazilian and Portuguese people but it is more of a joke than other stuff.'

Fernandes is firmly on course to be one of United's greatest ever players after a superb haul of 26 goals and 16 assists for the team this season.

United are on course to finish second behind Manchester City in the Premier League and are aiming to win the UEFA Europa League. 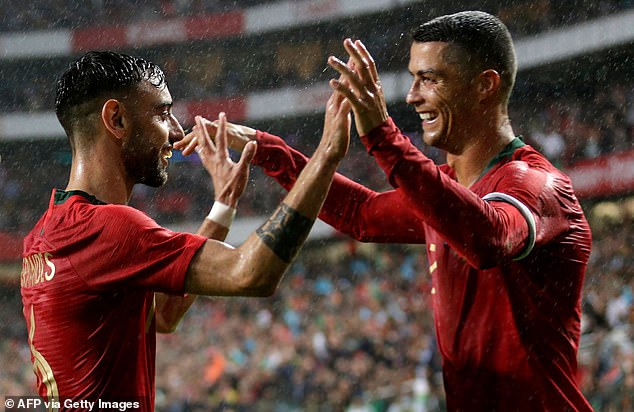