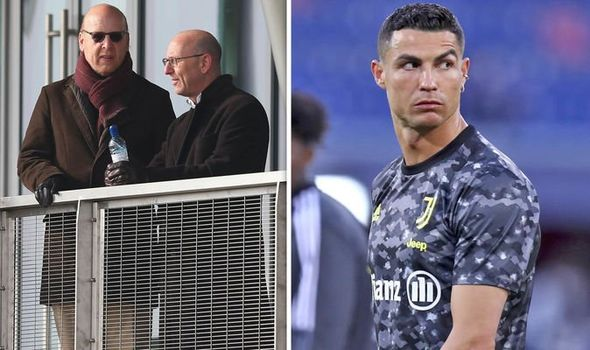 Cristiano Ronaldo could seal a blockbuster return to Manchester United in this summer's transfer window.

Cristiano Ronaldo looks set to leave Juventus behind in this summer’s transfer window. And Manchester United could be his next destination. Talk of a return has gathered momentum in recent times, especially amid the news the Glazers have held talks with Jorge Mendes about a potential deal.

Signed in 2003 as David Beckham’s replacement, after terrorising the Red Devils during a pre-season friendly, he fired the club to three straight Premier League titles as well as the Champions League trophy.

Ronaldo, in the years since departing for Real Madrid in 2009, has been tipped to return.

And, this summer, there’s a genuine chance that could happen.

Ronaldo is on the market this summer. Juventus, hit hard by the coronavirus crisis, are determined to get him off the wage bill.

And United are eyeing a deal.

It recently emerged the Glazers had held talks with the player’s agent, Mendes, about a potential return this summer.

With the Americans needing big-name signings, Ronaldo would certainly fit the bill. What’s more, Ole Gunnar Solskjaer himself is still in touch with his former team-mate.

It’s also been claimed the veteran is tempted by an emotional homecoming, especially with United having Champions League football to offer.

However, he’s previously agreed to come back - only to then go against his word.

It was Patrice Evra, speaking last year, who revealed Ronaldo had told Sir Alex Ferguson he’d come back - only for the situation to change and the Scot to retire.

“You know, you talk about the hardest moments [in my United career], I would say maybe this is the one,” Evra told club media in 2020.

“Two weeks before that, I remember there was a lot of media saying Ferguson will maybe retire next year, and he said, 'Patrice, I will never retire. I will be here another 10 years’.

“He then said: 'My target is I'm 99 per cent sure we will have Cristiano Ronaldo and Gareth Bale. I just need these two players to win the Champions League again. Ninety-nine per cent.’

“And to be fair, when I speak with Cristiano, I ask him and he said yes to the boss, and was coming to join United. He told me this.”

Evra then revealed how Ferguson’s retirement ended any hopes of Ronaldo coming back, while also devastating players within the dressing room.

“After two weeks, we were in the dressing room waiting,” he said.

“He came, and he said, 'I'm really sorry. Some people have said that I'm going to retire even before I say it myself. That's why you saw all those cameras. But I will retire because my wife needs me’. He apologised to [Robin] van Persie, he apologised to Shinji [Kagawa], because he just brought them. He apologised to them especially.”

The stars seem to be aligning when it comes to Ronaldo and, what’s more, is he appears to have already said his Juventus goodbyes.

The 36-year-old recently wrote on Instagram: "The life and career of any top player are made of ups and downs. Year after year, we face fantastic teams, with extraordinary players and ambitious goals, so we always have to give our best to keep ourselves at excellence levels.

"This year we couldn’t win Serie A, congratulations to Inter for the well-deserved title. However, I have to value everything that we achieved this season at Juventus, both in collective and individual terms.

"The Italian Super Cup, the Italian Cup and the Serie A Top Scorer trophy fill me with happiness, mainly due to the difficulty they carry with them, in a country where nothing is easy to win.

"With these achievements, I reached a goal that I had set myself since the first day I arrived in Italy: to win the Championship, the Cup and the Super Cup, and also to be Best Player and top scorer in this great football country filled with tremendous players, giant clubs and a very own football culture.

"I’ve already said that I don’t chase records, records chase me. For those who don't understand what I mean by this, it’s very simple: football is a collective game, but it is through individual overcoming that we help our teams achieve their goals.

"It is always looking for more and more on the field, working more and more off the field, that records eventually emerge and collective titles become inevitable, some being the natural consequence of the other.

"Nothing compares to the feeling of knowing that I’ve left my mark in the countries where I’ve played, and that I gave joy to the fans of the clubs I represented.

"Thanks to everyone who took part in this journey! We stand together!"