Villarreal winger Samuel Chukwueze has held talks with a number of top clubs and would “definitely consider” a summer transfer away from h... 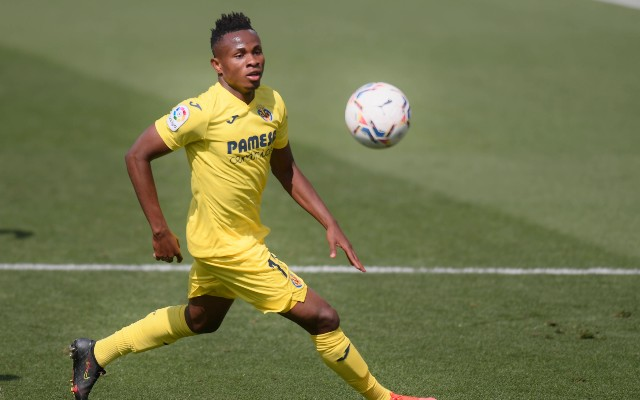 Villarreal winger Samuel Chukwueze has held talks with a number of top clubs and would “definitely consider” a summer transfer away from his current club, CaughtOffside understands.

Chukwueze has shone in La Liga and is open to moving on to a bigger club at the end of this season, provided the offer is right for him, a source close to the player revealed to CaughtOffside.

The Nigeria international has spoken with Premier League clubs who are regulars in European competition, as well as other unnamed sides from Europe’s big five leagues who also tend to take part in the Champions League on a regular basis.

Various previous reports from Spain have named Liverpool and Manchester United as suitors, as well as Chelsea, and the latest information CaughtOffside has received would suggest these teams remain among the contenders for Chukwueze’s signature.

The source revealed that although Chukwueze is “happy” at his current club, he would “definitely consider” leaving as long as “the right opportunity comes that makes sense for him and the club”.

Chukwueze has a release clause worth €80million that could allow him to leave Villarreal, but it remains to be seen if interested clubs will fork out quite that much on the 22-year-old.

Liverpool, United and Chelsea could all do with a signing like Chukwueze, who has five goals and six assists in all competitions this season, contributing to getting Unai Emery’s side into the Europa League final.

For Liverpool, Chukwueze could be a useful replacement for the out-of-form Sadio Mane, while he might also be an upgrade on inconsistent performers like Hakim Ziyech, Christian Pulisic and Callum Hudson-Odoi at Chelsea.

United will get a closer look at Chukwueze when they play in the Europa League final, and the Red Devils may well decide he’s an upgrade on players like Anthony Martial and Daniel James after their lack of impact this season.

It would be exciting to see Chukwueze choose England for his next club if he is to move this summer.