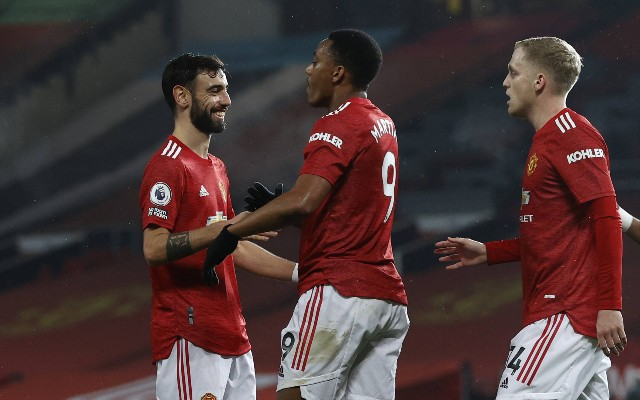 The Red Devils have just agreed a contact extension with Edinson Cavani, but Chadwick told us he’d still like to see his old club make a big move for a new centre-forward ahead of next season.

Kane or Haaland seem ideal for United after their immense recent goal-scoring form, though both are among the finest in the world so won’t come cheap.

Particularly in these challenging times with the coronavirus pandemic and no fans at games, one imagines Man Utd and other clubs will need to sell before they can buy this summer.

Chadwick, however, feels there are some big names who could be offloaded for decent money that would help United raise the kind of money they’d need to afford players of the calibre of Kane or Haaland.

“One that stands out immediately is Donny van de Beek, who doesn’t get much game time,” Chadwick told CaughtOffside when asked about who he’d look to sell.

“He’s done fine when he’s come on but I can’t imagine a player of his calibre and quality is going to be happy next season if he’s spending the same amount of time on the pitch.

“Especially with Bruno Fernandes ahead of him as the number ten playing more or less every game it’s going to be tough for him. United might have to take a financial hit if he moves on, but you can imagine both he and the club are thinking very seriously about his future.”

Chadwick added that Martial’s recent scoring record means it could also make sense to move him on and bring in a more prolific replacement.

“I think when you talk about the likes of a Kane or a Haaland coming in, maybe Anthony Martial is someone you could get a good return for,” Chadwick said.

“He’s a hugely talented player but probably not scored the amount of goals that you’d get out of Kane or Haaland, so if you can get rid of him there could be a lot of suitors across Europe.”

Finally, Chadwick also advised his old club that now could be the best time to cash in on Jesse Lingard, who has been in eye-catching form since joining West Ham on loan in January.

“The form that Lingard’s shown on loan at West Ham, he’s been a top, top performer in the Premier League,” Chadwick said.

“If there isn’t a starting place for him at Man United, the sort of age he’s at now he’s going to want to play regularly, there’s probably never been a better time to cash in on him.

“I think probably every club in the Premier League would be interested in him with the form he’s been in.

“With those three players sold you could certainly bring in a fair bit of income to then be able to strengthen the squad further.”

Chadwick has also made it clear he’s a big fan of Borussia Dortmund and England duo Jadon Sancho and Jude Bellingham, as he told us here.

“I know United were keen to get him (Bellingham) over the line when he was leaving Birmingham last summer so I’m sure he’s on their radar, he’s one of the top young talents in Europe at the moment, certainly,” he said.

“I think he could add to United hugely, I think he could offer something quite similar to McTominay and Fred – a real all-action midfielder, getting forwards, getting back. He’s an incredible athlete and I’m sure any top club in Europe would be interested in his services if he became available.”

He added: “In Sancho’s case, it’s a position United are maybe looking to strengthen in more, the wide areas rather than the central areas. Sancho is more of an out and out wide man than Rashford or Martial and is obviously incredibly gifted.

“I think you’d be quite satisfied with Sancho or Bellingham – two top young English players.”

United have not shied away from making big signings in the past, and after closing the gap on Manchester City this season, another good transfer window could help them take that final step next year to becoming genuine title contenders.