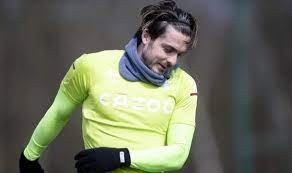 Manchester City boss Pep Guardiola has got an idea over what to do in the transfer window regarding Jack Grealish. Manchester United are interested in the Aston Villa star this summer.

However, whether a transfer actually goes through remains to be seen with the club having other targets.

The England international is set to be the centre of another transfer saga this summer with United keen on him.

It comes after a failed raid last year where Villa fended off the Red Devils after pricing Grealish at £80m.

And according to The Times, the newly-crowned Premier League champions believe that asking price is too steep - despite their vast wealth.

It is also reported that City have too many players in the same position and their priorities lie elsewhere.

That is despite the fact that Guardiola is a huge admirer of the playmaker, who has had a fine season for Villa.

In 22 Premier League appearances, he has scored six and assisted 10 before injury halted his progress.

Grealish is also looking to take part in his first competition for England and his price could soar if he has a good tournament.

It comes amid talk from his agent, Jonathan Barnett, that there are many clubs interested in the 25-year-old.

Speaking to SNTV, Barnett said: "The truth is we don't know [what will happen].

"There are many clubs [interested] and I wouldn't put Manchester United at the top of that [list].

"But he could stay.

"He could stay as well so it's a conversation the club, Aston Villa, will have with Jack and ourselves then we'll see where we go."