Manchester City are preparing to approach Tottenham over the possibility of signing Harry Kane in the summer transfer window. Manchester C... 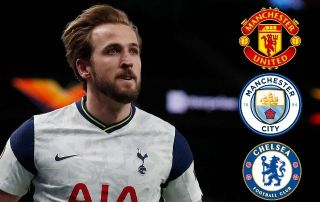 Manchester City are preparing to approach Tottenham over the possibility of signing Harry Kane in the summer transfer window.

Manchester City have surged ahead of Manchester United and Chelsea in the race to sign Harry Kane by making plans to hold imminent talks with Tottenham over a move, according to reports. The 27-year-old appears to be keen on finding a new challenge ahead of next season after informing club chiefs that he is determined to move on at the end of the campaign
Kane, who is widely regarded as one of the best players in world football, has successfully lived up to his formidable reputation for a number of years.This season alone, he has provided 36 goals and assists in just 33 Premier League appearances, but the England skipper has very little to show for his efforts.Spurs have failed to win a major trophy since 2008, missing a number of recent opportunities to end their long and painful drought in the process.Kane was a beaten Champions League finalist in 2019, with Liverpool claiming the greatest prize in club football at Tottenham's expense, while he faced the same fate last month as Pep Guardiola's City sealed a fourth successive Carabao Cup triumph at Wembley.The forward has never attempted to hide his dream of fighting for silverware at the highest level, and it seems as though he will be forced to give up on Spurs in order to leave a trophy-laden legacy upon his eventual retirement.
A handful of clubs are believed to be keeping tabs on Kane's developing situation, including Paris Saint-Germain, United and Chelsea.But City are thought to have gained an early advantage by taking the first step towards launching a formal approach for his services.The newly-crowned Premier League champions are already planning talks with Spurs, according to The Guardian, but all parties are aware that successfully negotiating a deal with Daniel Levy will prove to be extremely difficult.The 59-year-old has gained considerable notoriety over the years for his no-nonsense approach to the transfer market, and is not inclined to sell Kane, who remains under contract until the summer of 2024.
The report also claims that United's interest in the striker has cooled in recent weeks, with Edinson Cavani penning a one-year extension earlier this month to keep him at Old Trafford for another season.Meanwhile, Chelsea are yet to make a move for Kane and could struggle to land the Spurs talisman in any case due to Levy's reluctance to sell to a bitter rival.Former Tottenham midfielder Jamie O'Hara recently suggested that Kane cannot be blamed for wanting to leave the club in search of pastures new, claiming that supporters will not turn against him if he seals a move to City, United or Chelsea this summer."Normally you’d get criticism massively and the fans would turn against you," O’Hara told talkSPORT. "I don’t think that’s going to happen.
"He’s been a fantastic servant to the football club. Fans love him and I think everyone can see that he’s given everything and tried to get us over the line with trophies and winning finals."We haven’t got it done and the ambition of the club hasn’t been good enough. I think it’s fair to say that we’ve got a world class striker in Harry Kane and you can’t keep someone like that."We’re talking about a top five striker in the world when we’re finishing sixth or seventh the league. The fans understand that."