Both Manchester City and Man United lost European finals they were favourites to win this week.

It was supposed to be so different.

With both of the city's clubs in European finals eyes had already turned to an all-Manchester UEFA Super Cup. What an occasion that would be.

And why not dream?

Manchester United were clear favourites against minnows Villarreal, having already defeated seemingly tougher teams in previous rounds of the competition - even better teams from Spain. Ole Gunnar Solskjaer was supposed to lift his first trophy as manager, giving his divisive reign a solid sign that progress was being made.

Manchester City were also the favourites. Yeah, Chelsea had beaten them twice already in the last six weeks and Thomas Tuchel seemed to have Pep Guardiola's number, but those games were against a second-string side a few days after big Champions League victories. When they played City at full strength, it would be no contest. Guardiola was supposed to lift his first European trophy for a decade and the first in City's history, culminating five years of tireless work and devotion to create a sublime team.

In the end, both clubs fell flat on their faces, forced back to Manchester to lick their wounds in tears, both in ways that typified themselves under their managers.

United, like they have done for the entirety of Solskjaer's reign, were good in patches but were unable to capitalise and were ultimately punished in bewildering (and hilarious for the neutral) fashion. City, once more, were victims of Guardiola's dreaded overthinking.

But selection issues aside, it was clear that as the clock ticked down in Gdansk and Porto that both clubs had just run out of steam.

The closing 20 minutes of each game would look like carbon copies if the same coloured shirts were being worn: the Manchester club dominating the ball but absolutely bereft of any ideas, being held back by a resolute defence who didn't look like conceding no matter how long was played.

There was never any growing momentum. The goalkeepers were never forced into a string of magnificent saves. A goal never looked inevitable.

In the end, they both just ran out of gas and were outdone by teams that still had a bit more juice in the tank.

Who can blame either of them? This season - no, this last 12 months - has been utterly relentless for both Manchester clubs.

United's 2019/20 season didn't come to an end until August 16, when they were knocked out of the Europa League by Sevilla in the semi-finals as the tournament came to a close in Germany. City's concluded a day earlier, once again in Portugal, after they crashed out of the Champions League in the quarter-finals against Lyon. By that stage, Chelsea and Villarreal had their feet up.

Both were given an extra week's rest as the new Premier League season got underway again, but just five weeks later they were both back in the saddle embarking on an even more gruelling campaign, with fixtures coming every three days for the next nine months.

Five weeks is not nearly enough time for players to get sufficient rest and then get back to full fitness again for the coming season, let alone for managers to implement new ideas and tactics, for new arrivals to get acclimatised to their surroundings, for everyone to fully prepare for the year ahead.

The lack of a proper pre-season hurt both clubs and it showed with the starts they endured. City their worst since the takeover in 2008, with United losing half of their total losses (6) in the league for the season in their first six games.

The fact that both sides managed to get to the finals at all alone - not to mention City winning the league and the Carabao Cup in the process - is a minor miracle. Final defeats are obviously heartbreaking and enraging, but United and City really should be applauded for making it there in (mostly) one piece.

The bad news is, with the season finally over, a four-week major international tournament is just two weeks away. The football just does not stop and once again the players are going to have little time to relax and recuperate before the grind begins for another year.

However, the good news for United and City is that, this time at least, their major competitors are going to be in the same boat. All of the Premier League's top sides will see their best players compete this summer so everyone is going to have a disruptive summer. We're back on a level playing field.

If United and City have been able to do so much this year with a weight tied around their ankles, just what will they be able to achieve when free from the shackles? 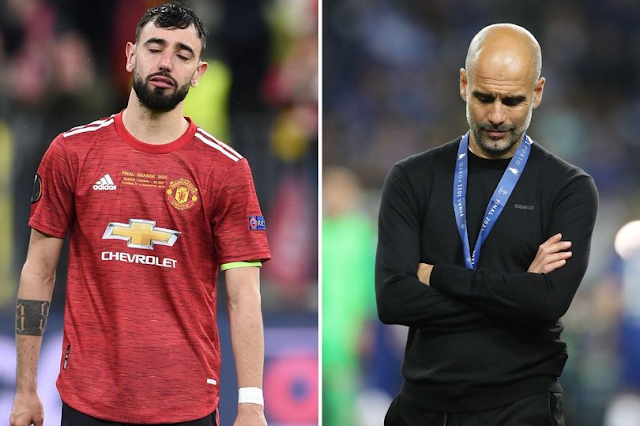