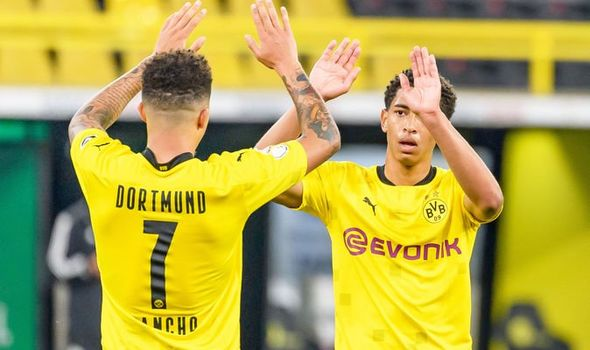 Manchester United will reportedly no longer pursue Jadon Sancho and go after Jude Bellingham instead.

Manchester United are more focused on signing Jude Bellingham than they are on his Borussia Dortmund and England team-mate Jadon Sancho, according to reports. Sancho was a top target for United last summer but they were not willing to pay Dortmund's asking price of £108million. The winger is likely to cost less than that price for any club who were to pursue a deal this year.

Sancho's contract at Dortmund expires in 2023 and he has also not been as productive in terms of goals and assists this season as he was last term.

Bellingham has made 27 Bundesliga appearances already despite not turning 18 until next month.

United were keen on signing the teenager before he joined Dortmund.

Bellingham was shown around United's Carrington training ground in an attempt to convince him to join the club.

Dortmund won that battle but United's interest has not ceased, according to Bild reporter Christian Falk.

Falk says a move for Sancho is unlikely this summer because Ole Gunnar Solskjaer's side are instead focusing their attention on Bellingham.

“The curious thing is, as you say, we’ve talked about them so often, they always want to see him pay, and suddenly, according to our information, there’s only one offer for him,” Falk told BILD.

“Dortmund would probably even be prepared to accept such an amount of €90m (£78.1m), which then rises above a hundred, but in fact, the English are very, very reluctant.

“At United at the moment, there is nothing at all on the Sancho interest; on the contrary, a move is not likely. The reason? Jude Bellingham.

“Dortmund themselves have the replacement for Sancho and would therefore already sell Sancho, and the English are now simply focussing on Bellingham instead.”

Bellingham has already won two caps for the senior England side and former United midfielder Owen Hargreaves believes he will be a starter at this summer's European Championships.

"I think Bellingham will start for Gareth [Southgate] at the Euros," Hargreaves said on BT Sport.

"His all-around game is so good, he plays like a grown man.

"He's already a star and he's going to be one of the best in a short time."