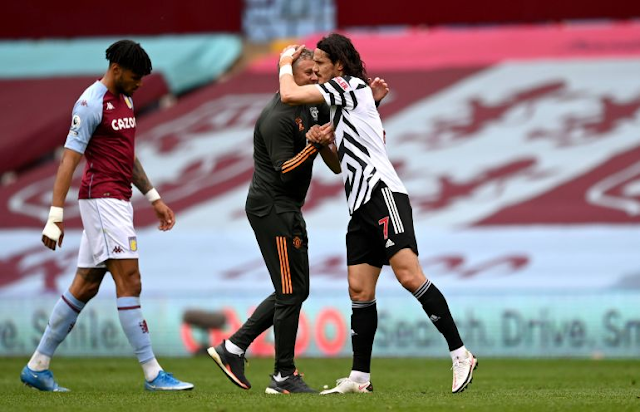 Manchester United fans will be delighted to learn that fan favourite Edinson Cavani actually matched a feat shared by Ole Gunnar Solskjaer with a goal off the bench for the Red Devils against Aston Villa.

Cavani was called into action in the 65th minute of this afternoon’s Premier League tie, it was 2-1 at the time and the Uruguayan went on to seal a victory with a classy goal in the 87th minute.

Opta have shared that Cavani actually equalled an achievement that Solskjaer joint-holds with former Mexican icon Javier Hernandez, in regards to the highest number of Premier League goals as a sub.

Cavani’s header marked a fifth goal off the bench for the 34-year-old in the top-flight this season, the world-class striker has scored nine times in the Premier League overall.

Cavani now has some time to break the mark of five that Hernandez set in the 2010/11 season and the same number that Solskjaer set with his brilliant contributions in the 1998/99 treble-winning campaign.

5 - Edinson Cavani has equalled the Manchester United record for the highest number of Premier League goals scored as a substitute in a season, currently held by Chicharito in 2010-11 and Ole Gunnar Solskjær in 1998-99 (5 each). Weapon.

Cavani has struck 15 goals and provided five assists in 35 appearances across all competitions this season, the Red Devils should really be doing everything to keep hold of El Matador past this summer.

The Uruguayan legend is loved by the club’s supporters for his relentless application, obvious and fruitful mentorship of the club’s younger talents and most of all his reliability – starting or as a sub.