Paul Pogba with Raphael Varane and Antoine Griezmann  (Image: @raphaelvarane) Man United are looking for a new centre-back this summer and...

Man United are looking for a new centre-back this summer and Real Madrid's Raphael Varane is on the shortlist.

Manchester United want Paul Pogba to convince Raphael Varane to join the club after the centre-back posted a photograph with them together.

United are set for a hectic summer with Ole Gunnar Solskjaer eyeing a number of key signings to strengthen his squad ahead of the new season.

A new partner for Harry Maguire is the priority, and it's understood that United will go 'all out' for a new centre-back in the transfer window.

Villarreal's Pau Torres is being considered but the Manchester Evening News understands that United have already opened exploratory talks with Varane's representatives.

The 28-year-old is in the final year of his contract at Real Madrid and despite enjoying a trophy-laden decade in the Spanish capital he is considering his future.

Real promised the club captaincy to Varane with their contract offer but the centre-back is open to leaving as he believes there is a disparity between his salary offer and what his best-paid teammates are earning.

Florentine Perez would rather sell this summer than risk losing him for nothing and the MEN revealed in March that Los Blancos are prepared to sell , with a value at around £60million.

United's Europa League final defeat to Villarreal, in which they once again conceded from a set-piece, again made it clear just how much a new centre-back is needed this summer.

Fans would love to see Varane arrive at Old Trafford and were sent wild on Sunday when the Frenchman posted a photo on Instagram alongside Pogba.

The United midfielder has now linked up with the France squad ahead of Euro 2020 and posed for a snap with the defender, as well as Barcelona man Antoine Griezmann, and some supporters are hoping that he will bring Varane back to Manchester with him.

U know what to do Paul

Varane was asked about his future earlier this week but remained tight lipped.

“We are all human beings. We can think about it. As for my personal case, I am focused on the objectives that we have in the France team, it is not a subject that I will discuss every day in my room at Clairefontaine.

“I am focused on my goal, and now is not the time to discuss it. If I have to talk about it, it will be directly with the people concerned.” 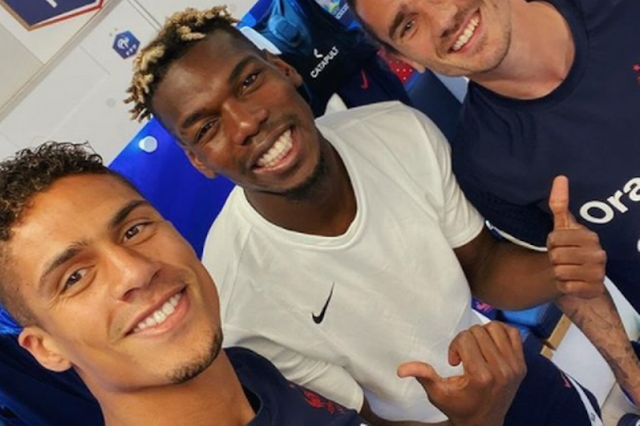