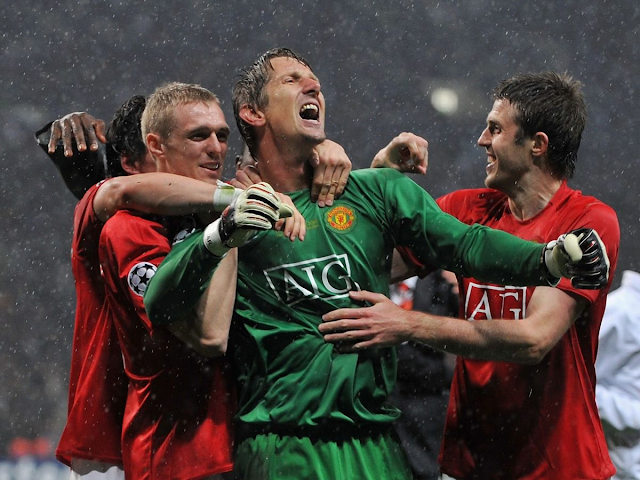 Manchester United hero Edwin van der Sar has confirmed contact from the club regarding a potential return to Old Trafford. The Dutchman signed from Fulham back in the summer transfer window of 2005. And he was a huge hit under Sir Alex Ferguson, helping the club to win four Premier League titles.

Manchester United are on the lookout for somebody to replace Ed Woodward.

Woodward, who has been in charge of things at Old Trafford ever since David Gill’s exit in 2013, recently announced his resignation in the wake of the failed European Super League plot.

Now, attentions are starting to turn to who will replace him.

Some think the Glazers will promote from within, with Richard Arnold the likeliest candidate to land the job.

But many United fans want Van der Sar to come back instead, especially given his fine footballing work at Ajax.

The former goalkeeper has helped the Eredivisie champions stay consistent year after year, despite operating on a frugal budget and often losing their best players.

“Manchester United? It’s always nice to read positive things about you,” he said.

“Everyone is ambitious in life. Did they contact me? Yes, a few years ago already.”

Van der Sar also refused to rule out a return, though did admit that a number of factors would have to be considered.

“What kind of CEO is Manchester United looking for? I am not your typical CEO,” he added.

“I am a CEO more for the football side of things. Ajax is very structured. Manchester United is so different and you have to work with several owners there too.

“Does that suit you or do you like your life in Noordwijk and Amsterdam enough? That is the question.

“I couldn’t do this job at a club I don’t like.

“I am extremely happy with what we have been able to achieve at Ajax.

“Ten years ago we had the ambition to join Europe’s elite and we have lived up to those words. We did that through hard work and without a rich sugar daddy or government funding to help us.”

Whether United go after Van der Sar remains to be seen.

But he’d certainly tick all the right boxes on the footballing side, even if the Glazers may prefer someone with more commercial expertise.

Woodward addressed a fans' forum and he said: "It's clear we did not do enough of that (listening) before the Super League decision. Today is our first step towards putting that right.

"You will all have read Joel's open letter to fans last week apologising for the Super League decision and I would like to add my personal apology to this Forum.

"I know that you will feel angry and let down by the lack of consultation and by the way the proposal failed to recognise the vital principle of open competition. Proper discussion would have helped us avoid the mistake we made.

"We fully accept that there were fundamental elements which were badly misjudged. We failed to give enough weight to the essential principles and traditions of sporting merit which are so vital to football not just in domestic competition but in European competition since the mid-1950s.

"We want to restate our commitment to those traditions. I can assure you that we have learned our lesson from the events of the past week and we do not seek any revival of the Super League plans.

"We will now continue working with the rest of the football community to address the long-term challenges facing the game.

"But I can assure you that we will be doing that with great sensitivity to the opinions that you and other fans have expressed in recent days.

"We will be listening closely to your feedback today, and we’ll be taking it away for consideration as we review how we can engage more effectively with you in future. Our fans are what makes Manchester United so great, and they should always be at the heart of this club."