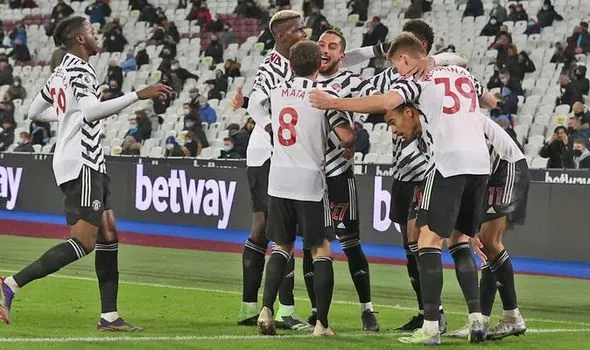 Manchester United star Mason Greenwood has admitted the club regularly finding themselves going behind is a ‘bad habit’ that needs to change. The Red Devils were 1-0 down against Aston Villa on Sunday after Bertrand Traore struck. However, Greenwood then helped his side mount an impressive comeback and claim all three Premier League points.

Traore’s goal was terrific, with the Villa star capitalising on some poor defending from Victor Lindelof to open the scoring.

But United, instead of letting their heads drop, instead upped the ante to claim victory.

Bruno Fernandes scored his 27th goal of the campaign from the penalty spot, converting his effort after Paul Pogba had been fouled.

Greenwood then put United ahead, with the England international beating Emiliano Martinez with a powerful low strike.

And Edinson Cavani made the game safe late on, coming off the bench to score a header and net his eighth goal from his last seven appearances in the process.

Yet while United were a happy camp after the match, Greenwood has bemoaned their ‘bad habit’ of going behind and having to turn things around.

“We’ve got a little bit of a bad habit,” he told MUTV.

“It’s not so bad if we come and get the three points; it’s just a wake up call when they score.

“We know we can come back second half and get the three points. We need to work on it and not give little goals away in the first half so we don’t have to come back from behind.

“We were always confident that we’d get the three points. That first goal was good play from Paul to get the penalty.

“We always knew Bruno would put it in the back of the net. It was a confidence booster. From there, we looked comfortable and got the three points.”

Looking back on his goal, Greenwood admitted it was a ‘good’ strike.

The teenager said: “It was a good goal.

“I just knew that he [Mings] was coming tight to you in the box, so if you get a little movement then you can get half a yard. I finished it well, I'm happy with my goal today.

"Hopefully there are many more to come. I'll try and keep scoring goals so no one else can come and break the record in the future! I’m happy scoring goals.“

And the 48-year-old insisted he was still confident his side would claim victory, even when Villa were ahead in the first half.

“Yeah, sometimes, you know, you want to up the tempo a bit,” he said.

“I was confident. I was very confident. I felt we played okay in the first half, we created chances but didn’t take them.

“It was just about confidence, believing in what we are doing and they showed that in abundance.

“I’m delighted, it's always going to be difficult after you’ve been in Europe, in Rome. We didn’t come back until half past four/five o’clock in the morning [on] Friday.

“I can’t blame them, the advantage of being fresh going into a game like this is quite high and it’s just coincidence that tells you we could have scored the first goal once or twice before they scored.

“They scored from nothing – a good goal by the way – but I’m pleased with everyone. I know how hard it is towards the end of a long season.”

“Yeah, Mason’s turn and finish was absolutely top,” he said. “The boy is learning.

“He’s learned the hard way and he’s got to play, he’s learning on the job. It is the intensity of this league, it’s high, and he had a hard game on Thursday and plays today and produces that goal.

“Well done. More to come, definitely. One hundred per cent. The boy is learning, hungry to learn and his desire and attitude is improving all the time.”