The Red Devils take on their Merseyside rivals for the final time this season. With that in mind, let’s take a look at our predicted Man U... The Red Devils take on their Merseyside rivals for the final time this season. With that in mind, let’s take a look at our predicted Man Utd XI for their game vs Liverpool.

Manchester United are pretty much guaranteed to finish in that second-place spot, meaning we’ll be in the Champions League next season. However, as for Liverpool, they’re in sixth, four points off the pace.

How sweet would it be to take points off Jurgen Klopp’s men tomorrow? Further denting their hopes at playing in Europe’s premier competition. Obviously, that’s easier said than done, while games like this deserve a jam-packed Old Trafford rather than the Theatre of Dreams looking and feeling like a ghost town.

Anyway, for Ole Gunnar Solskjaer, he has a pretty good selection of players to choose from with just Anthony Martial and Phil Jones the only absentees. Anyway, let’s get right into the all-important team news… 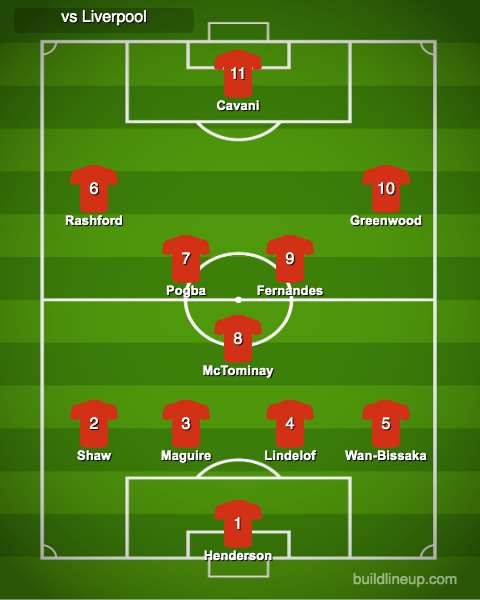 Dean Henderson returns as our now-customary first-choice goalkeeper. The Englishman has been pretty great this term, though this will be another big test for our new number one.

Aaron Wan-Bissaka has been the only viable option at right-back all season, so why change that for this one? Luke Shaw is probably the best full-back in the country right now and he starts whenever fit. Harry Maguire leads his boys into battle, proudly donning the captain’s armband as per usual. Victor Lindelof completes the back four.

Scott McTominay sits at the midfield’s base, where his energy, physicality and presence is going to be key. Bruno Fernandes looked back to his brilliant best last time out, while Paul Pogba’s current form speaks for itself.

Edinson Cavani leads the line here. I was so, so close to sticking him on the bench but with the AS Roma tie all-but over, why not play him here as he’s our best option? Marcus Rashford continues to fight through the pain barrier to start matches, with Mason Greenwood coming back into the fold.