Talks to be ‘accelerated’ on fans owning stock in Manchester United

Joel Glazer has promised to “accelerate” discussions regarding fans owning shares in Manchester United, with the co-chairman acknowledging the need for change called for by those disgruntled with his family’s ownership.

Glazer made the comments in an open letter to United’s fans’ forum which has 11 representatives of match-going supporters. It is understood that Glazer is ready to meet fans as part of a consultation process.

“As one of the few European football clubs listed on the public markets, we believe in the principle of fans owning shares in the club,” he wrote. “We have previously engaged with the Manchester United Supporters’ Trust on fan share ownership and we want to continue and accelerate those discussions, together with provisions to enhance associated fan consultation.

“In particular, I want to acknowledge the need for change, with deeper consultation with you [fans’ forum] as our main fan representative body across a range of important issues, including the competitions we play in. We also recognise the importance of fan and football interests being embedded in key decision-making processes at every level of the club, and we are open to constructive discussions on how to reinforce that principle.”

Glazer’s statement is the first since Sunday’s protest against his family outside Old Trafford and the Lowry hotel, where the team stay before matches, which caused the match with Liverpool to be postponed. It comes after the Glazers apologised for their involvement in the European Super League.

United fans have said they will stage another protest against the owners before Thursday’s game at home to Liverpool. The supporters’ trust said of Glazer’s letter: “The response could in theory – and we emphasise in theory only – be a change in direction and approach by the owners versus their silence and disregard for communication over the last 16 years.

“Our primary objective remains to ensure a supporter share scheme is put in place which carries equal voting rights to the shares held by the Glazer family. This scheme would be promoted to the global fanbase and should in turn build a notable stake in the club.”

Glazer also wrote in his open letter: “We recognise that we will need to significantly increase investment in Old Trafford and our training complex to ensure that the club’s facilities remain among the best in Europe. As part of this, we will consult with fans on investments related to the stadium and the matchday experience.” 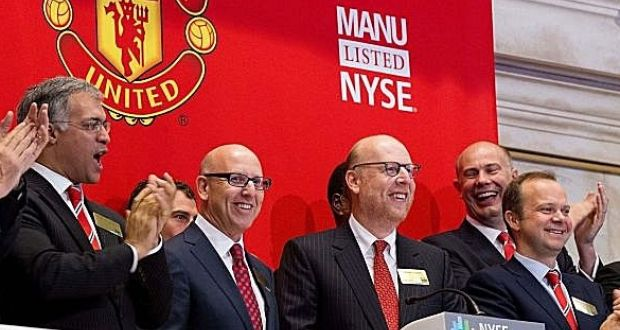