The £47million transfer gamble that has paid off for Manchester United

Bruno Fernandes is about to face the man who Manchester United almost signed instead of him.

Manchester United's recruitment has improved in recent years, with more productive decisions and fewer mistakes made in the transfer market, allowing Ole Gunnar Solskjaer to gradually improve his team.

Arguably the club's most successful signing in the post-Sir Alex Ferguson era has been Bruno Fernandes, who has been at the club for less than 18 months but has already made quite the impact in England.

As United 's busy schedule continues, the Portuguese is set to come up against one of the players who was also on the club's shortlist as they searched for a new No.10 two years ago.

Leicester City will make the trip to Old Trafford on Tuesday, with James Maddison occupying the Fernandes role for the Foxes, likely behind Jamie Vardy and Kelechi Iheanacho.

Maddison was on United's shortlist of targets last season but it was Fernandes who joined the club, making an instant impression after making the move from Sporting Lisbon.

Solskjaer had plenty of speed at his disposal with the likes of Marcus Rashford and Anthony Martial darting in behind, but he needed a No.10 who would benefit from the stretched defences and the space created by those penetrative runs in behind.

There was an element of risk attached to the transfer given Maddison's proven ability in the Premier League compared to Fernandes - who was performing in the Portuguese Primeira Liga - but United will have zero regrets looking back.

Not only has the United talisman entered his peak since his move - now aged 26 compared to Maddison who is 24 - but he's yet to miss a single contest through injury at his new club.

Availability tends to be a very underrated trait, with Maddison missing as many as 12 games stretching 129 days over the same period, forcing Brendan Rodgers to come up with tactical solutions without him.

In addition to taking to the field more often, Fernandes has added leadership to the group and he's delivered meaningful moments with greater frequency.

The United midfielder has averaged 0.67 goals and assists minus penalties per 90 since his £47m move, compared to Maddison's 0.44 per 90 by the same numbers; on a per-90 basis, the former has also averaged more passes into the penalty box, more progressive passes and more switches of play.

The duo will compete for three points on Tuesday but regardless who comes out on top, Solskjaer will know that his decision was the right one. 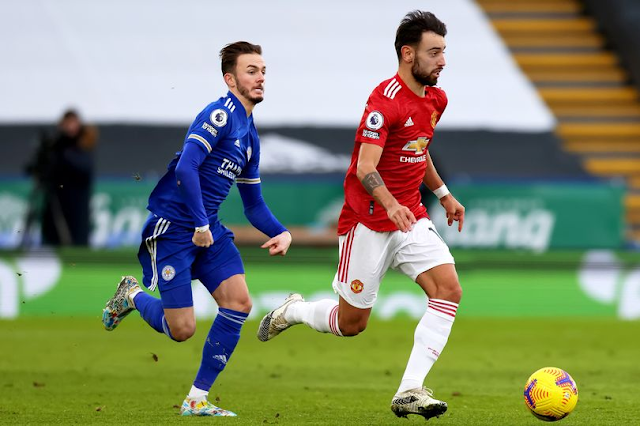