The explosive $2.7 billion United showdown 16 years in the making

It was an eruption of anger 16 years in the making. When about 200 furious Manchester United fans stormed Old Trafford on Monday morning t... 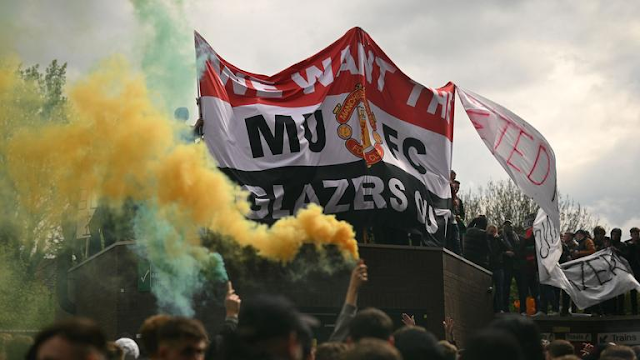 It was an eruption of anger 16 years in the making.

When about 200 furious Manchester United fans stormed Old Trafford on Monday morning they had one clear target.

The problem was their enemy, as they always have been, was thousands of miles away.

In ugly scenes that prompted the historic postponement of their clash with bitter rivals Liverpool, fans clashed with police, hurling glass bottles and missiles. 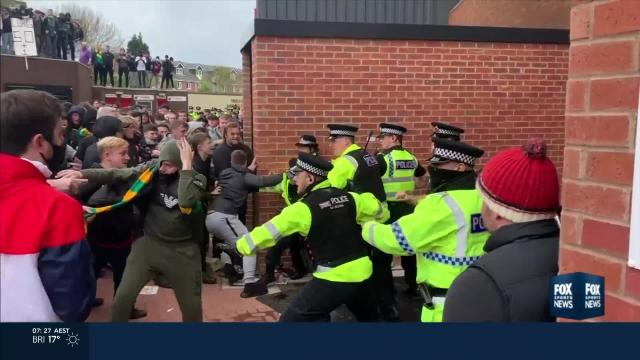 “They have never met the fans once,” 33-year-old fan Jack Evans said to reporters on the scene.

“They” are the Glazer family, the American owners of the famous club.

Under Sir Alex Ferguson the Red Devils were the envy of English football, dominating on the field like rarely seen before and soaring in both popularity and finances.

A decade and a half on under the ownership of the Glazers and the club has lost more than one billion pounds and been relegated to Premier League also-rans.

A large-scale demonstration like the one on Monday was expected but not to the extent that it would force the Premier League to postpone a game due to fan protests for the first time in its history.

The proposal of a breakaway Super League had prompted fierce backlash across the other five ‘big six’ clubs but for United fans this was different, this was expected.

It was just the latest incident of fan unrest and call for the end of the Glazer family’s reign - one which started with a £200 million ($A358m) racehorse.

THE RACEHORSE THAT DOOMED UNITED

The Glazer family’s control over Manchester United can be traced back to a fierce legal dispute between Ferguson and Irish racing tycoon John Magnier.

Ferguson believed he was part-owner of the champion horse ‘Rock of Gibraltar’ after a conversation with Magnier in 2001.

The stallion had ran in United colours and was reportedly worth £50 million ($90m) in 2002, when Ferguson decided to cash in - to the dismay of Magnier and JP McManus.

Crucially, the pair were shareholders at United and together owned around 30 per cent of the shares.

The Glazers were proprietors of the Tampa Bay Buccaneers and the head of the family, Malcolm Glazer, began acquiring shares in United eventually reaching 30 per cent ownership.

To acquire 75 per cent and a total buyout of the club, the Glazers needed Magnier and McManus to sell their shares.

While the board recommended against doing so, Magnier and McManus sold their shares after the dispute over the ‘Rock of Gibraltar’ landed in court.

Within a month Glazer acquired 98 per cent of the club’s share before completing the takeover.

SUCCESS IN SPITE OF GREED

To understand the context behind fan discontent, it is first important to put into context just how successful United was prior to the Glazer takeover.

In 2001 it was the most successful stock market listed football club in the world, recording a pre-tax profit of almost £22 million ($A39m).

On the field Ferguson became the first manager in English football to oversee a third successive title while the profits allowed him to only make the squad better, adding Rio Ferdinand in 2002.

Other big-name signings before the Glazer period included Wayne Rooney and Cristiano Ronaldo.

The Red Devils then finished third in the 2001-2002 season before regaining the title the following season.

United had won 14 trophies in the decade prior to the Glazer takeover - six Premier League titles, one Champions League, three FA Cups, three Community Shield and one Club World Cup.

In the decade leading up to 2015, United continued to thrive on the pitch despite the Glazers, winning 15 trophies including five Premier League titles and three League Cups.

United though did not make the same big splashes on the transfer market, although Ferguson publicly insisted he was not feeling the squeeze because of the club’s debts under the Glazers.

He claimed United “have got the money” but that he did not “see that player who can make a difference.”

The Red Devils though had been debt-free until 2005 - that all changed with the Glazer takeover.

Now United have not won the Premier League since Ferguson retired in 2013.

A DECADE OF DISCONTENT

2012 - United shares were traded on the New York stock exchange with the Glazers pocketing £75m by selling a portion of their shares.

2015 - Manchester United pay Glazer’s six children £15m ($A27m) every year following announcement there will be a dividend to shareholders. It came on the same day United announced their revenue had dropped 8.8 per cent following a failed attempt to qualify for the Champions League the season prior.

2017 - Glazers had initially began purchasing shares in United in 2003 through a holding company called Red Football, which in 2017 sold shares in the club that saw the family pocket another £56m ($A100m).

2020 -The Athletic reported that the Glazers’ ownership had cost the club £1.5 billion ($A2.7 billion) while simultaneously they had taken around £200 million ($A358m) from the club.

PROTESTS 16 YEARS IN THE MAKING

In July 2005 the Glazers flew to England for their first visit to Old Trafford - one that ended with them being driven out in a police van for their own safety.

Supporters joined the anti-Glazer protest after word circulated the Glazers would be visiting, with chants erupting: “He’s gonna die, Malcolm Glazer’s gonna die, how we’ll kill him I don’t know, cut him up from head to toe.”

An effigy of the American businessman was hung from the club’s gates.

Fans also carried ‘Not For Sale’ banners with the main objection centring on the levels of debt the club was incurring, estimated at that point to be valued at £300 million ($A537m).

It was later reported that the Glazers had paid £790 million ($A1.4b) for United in 2005, with the majority of the money secured by borrowing, partly against the club itself.

More stickers and banners with the same message then began to pop up around the city.

In 2010 the anti-Glazers green-and-gold campaign was born.

Manchester United were champions, playing in its third Champions League final in four years and had won the League Cup.

But after selling Ronaldo and Carlos Tevez and replacing them with Antonio Valencia, Gabriel Obertan and Michael Owen, supporters were worried about the direction the club was heading.

Instead of the usual swarms of red and white, United’s end of Old Trafford was green and gold.

It was a symbolic act of defiance against the Glazer family, signalling a return to the colours of Newtown Heath, the club founded in 1878 that eventually became Manchester United in 1902.

The green and gold scarfs were passed around by the Manchester United Supporters’ Trust, who campaigned for the Glazer family to be removed.

Even David Beckham became a figurehead for the movement, sporting a green and gold scarf after AC Milan’s game at Old Trafford.

The long-running discontent reached its boiling point after the Glazers’ plot to join the Super League and the family is only facing increased pressure to sell up.

Manchester United - a well-respected and prestigious 149-year old institution has been reduced to a cash cow under the Glazer reign and an on-field slide towards mediocrity followed.

It was not just the fans who are fed up either.

United legend Gary Neville told Sky Sports on Monday that behind the scenes, the stadium is “rusty and rotting” and the club’s controversial owners are to blame.

“This is a consequence of the Manchester United owners’ actions two weeks ago,” Neville said.

“There is a general distrust and dislike of the owners, but they weren’t protesting two or three weeks ago.

“There’s huge discontent. They’re basically saying enough is enough. The Glazer family have been resilient and stubborn for many years. I think they’re struggling to meet the financial demands this club needs and have done for some time.

“You look at the club now. This stadium, if you go behind the scenes, is rusty and rotting. The training ground is probably now not even in the top five in this country.

“They haven’t got to a Champions League semi-final for 10 years and haven’t won the league for eight years. The land around the ground is undeveloped, dormant and derelict when every other club seems to be developing their facilities and their fan experiences.

“If they were to put it up for sale now I think the time would be right and it’d be the honourable thing to do.”

The Glazers though already missed the chance to do the “honourable thing”.

Executive vice-chairman Ed Woodward made the effort to meet with United supporters at a recent fan forum following the Super League fiasco.

Co-chairman Joel Glazer, on the other hand, only issued an apology - one that was formally rejected by United fans who have grown tired by continue greed which has contaminated the club’s history.

Only more evidence of the simple yet jarring statement former United and Chelsea chief executive Peter Kenyon had for The Athletic.

“I don’t believe the Glazers really know what football is all about,” he said.

“I’m not sure the people who are in that club now know what the club is all about.”

For them, it is money and nothing else at the moment.