Video: Man United fans in sync as they sing that owner Joel Glazer is ‘gonna die’ as protests before rescheduled Liverpool tie heat up

A large number of Manchester United fans are back at the protesting just hours before their beloved side are scheduled to face rivals Liverp... 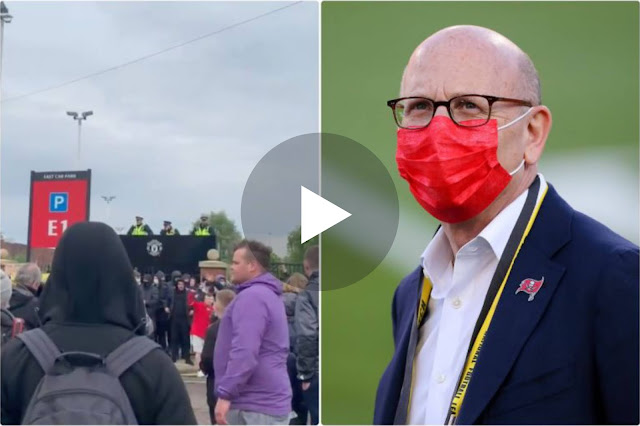 A large number of Manchester United fans are back at the protesting just hours before their beloved side are scheduled to face rivals Liverpool, in a match that was already postponed once before.

It’s evident that the number of impassioned fans outside Old Trafford is now growing, with a number of protesters on the scene right now bursting into a shock chant to vent their fury at the Glazer family.

Chants of ‘Joel Glazer is gonna die’ have been filmed and shared to social media.

Joel, one member of the mega-rich family that own the club, played a pivotal role in signing the club up for the European Super League and he was set to be the competition’s vice-chairman.

Joel Glazer is not a popular man. #MUFC pic.twitter.com/iZcEvNFMD9

The majority of the club’s fanbase already seemed to be at odds with the Glazer family over the nature of their takeover, loans they accrue interest on to this day and an apparent lack of investment.

Now though, it seems as though the club’s ruling American family will never be forgiven by the team’s supporters after signing them up to the now defunct European Super League.

It’s crazy to see that the fans are so annoyed that they are wishing death – or awaiting the chance to celebrate the end of Joel’s life.