With the number of Manchester United fans outside Old Trafford ahead of this evening’s rescheduled tie against rivals Liverpool, some suppor... 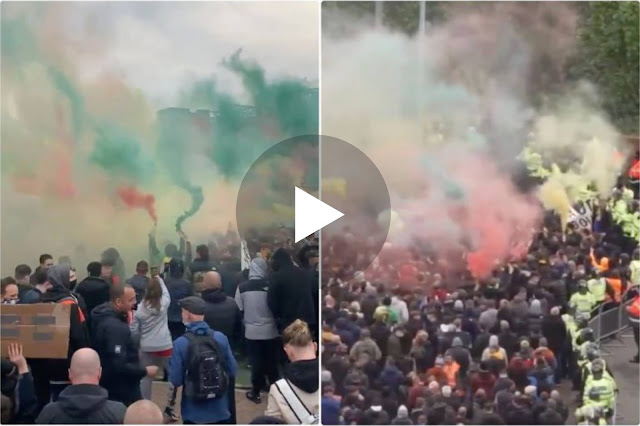 With the number of Manchester United fans outside Old Trafford ahead of this evening’s rescheduled tie against rivals Liverpool, some supporters have now let off smoke bombs/flares to mark their presence.

Green and yellow smoke bombs have been used to resemble the historic colours of the club, whilst red smoke has also been let out into the air to mark the side’s current primary colour.

It’s clear that the protest is peaceful as things stand, the fans don’t appear to have made any attempts to break the barriers and are merely chanting their love for the club and hate for the owners.

Lots of smoke bombs and a definitive ‘move’ towards the stadium, a show of intent. But still quiet and controlled compared to 11 days ago pic.twitter.com/CFl3hfi5qW

Current scenes outside Old Trafford ahead of Manchester United VS Liverpool! 🏟#MUNLIV pic.twitter.com/lol9c9M3Yh

Considering the increased security measures that have been deployed today, it would certainly take some doing to have the match postponed once more, with fans technically not on stadium ground right now perhaps the fixture will be safe, the Liverpool team’s arrival could still be disrupted though.