Football fans will be surprised to see a new kind of celebration as Norwich City celebrated their promotion back to the Premier League on ... 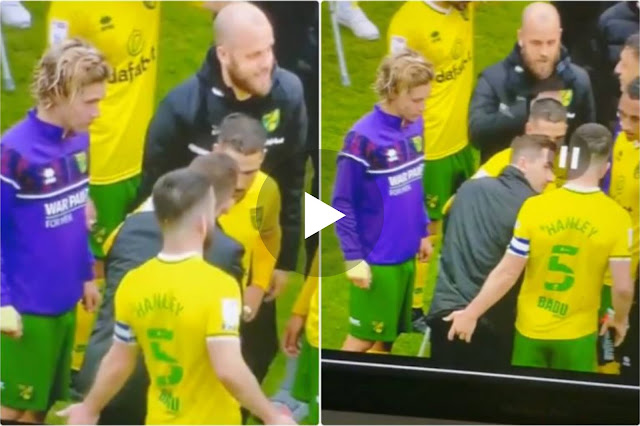 Football fans will be surprised to see a new kind of celebration as Norwich City celebrated their promotion back to the Premier League on the final day of the regular Championship season today.

The Canaries finished their title-winning campaign with a draw against Barnsley on Saturday and then had themselves a little promotion party on the Oakwell pitch.

There was one particular moment that might just be the first of it’s kind ever in football, a true feat, as Norwich captain Grant Hanley approached and slapped the bottom of teammate Kenny McLean.

Hanley’s club and country (Scotland) teammate was forced off just minutes into the second-half with a knee injury that Sky Sports report will leave the playmaker a doubt for the Euros this summer.

As McLean was stood on crutches, Hanley slapped his bottom and then planted his hand into his pal’s bum to give him the kind of lift that will have walking back to normal in no time.

Hanley’s middle finger was inside McLean whilst he tapped on his pal’s cheeks with another finger.

Norwich starlet Todd Cantwell was right next to the duo in the huddle and didn’t react at all to the moment, so it’s probably a common way for Hanley and McLean to celebrate, which they’ve been blessed with the chance to do many times this season after 29 wins.

This moment is bound to spark reaction and conversation on social media but both individuals were clearly comfortable and that’s all that matters.