Man United superstar Bruno Fernandes kept it brutally honest when he was questioned as to whether the changes to team preparations as a re... 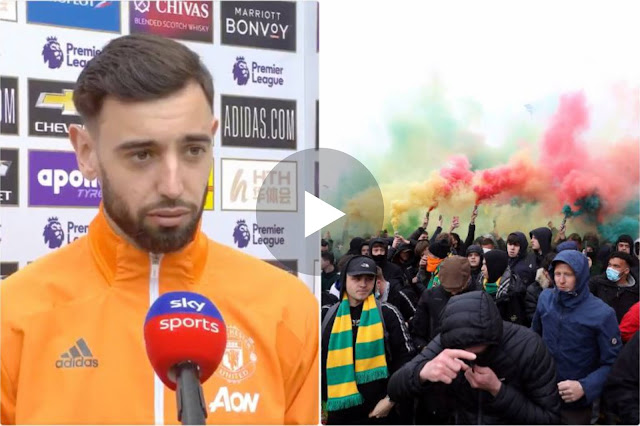 Man United superstar Bruno Fernandes kept it brutally honest when he was questioned as to whether the changes to team preparations as a result of fan protests could impact the side against Liverpool.

Fernandes was asked ‘how different?’ the team’s build-up has been ahead of their rescheduled clash against their heated rivals by Sky Sports during a pre-match interview.

The playmaker insisted that everything has been ‘almost the same’. Ole Gunnar Solskjaer’s squad arrived at Old Trafford much earlier than usual in order to avoid being held up by the fan protests.

A large number of the club’s fans are once again protesting against the Glazers tonight, but security measures have been strengthened to avoid the fixture being postponed, like the start of the month.

When pressed as to whether the changes to preparation could have an ‘effect’ on the side’s performance, Fernandes replied ‘I hope not. We will see.’ before laughing off the ordeal.

🗣"So not effect arriving at the stadium earlier than usual?"

Bruno Fernandes talks about having to arrive at Old Trafford earlier due to the fan protest and previews Manchester United VS Liverpool #MUNLIV pic.twitter.com/uHly85tWhv

Interviewer: “So no effect on you arriving at the stadium much earlier than usual?”

Fernandes: “I hope not. We will see.” (Bruno laughs)

The Manchester United supporters have not been scared off by the police presence and the barriers, they’ve been peacefully protesting all night, but one particular chant may well split opinion.

The Red Devils’ faithful will be hoping that Fernandes and the team can pull off a decent result against the Reds, which would make Champions League qualification increasingly difficult for their rivals.

A victory or draw over Jurgen Klopp’s side will also ensure that the fanbase aren’t mocked on social media, having tried and failed with some tactics to rattle the Liverpool team’s preparations.