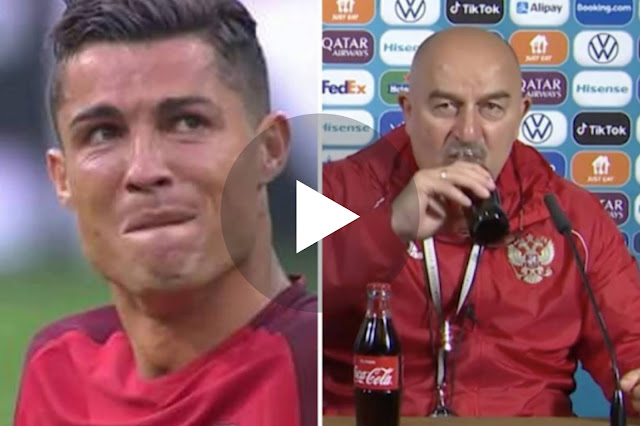 Euro 2020, which was supposed to be a great footballing spectacle, has become rather farcical in recent days, with Cristiano Ronaldo, followed by Manuel Locatelli, revealing their distaste for sugary soft drinks.

Stanislav Cherchesov, a no-nonsense Russian who laughs in the face of the danger that sugary drinks pose, has just told them all to do one, with his actions, rather than his words.

Cherchesov, attending a press conference to speak to the media in regards to Russia’s Euro 2020 campaign, spotted the two bottles of Coca-Cola in front of him and made his move.

The former USSR goalkeeper had his gigantic cojones on full display and he picked up BOTH bottles, before doing something quite extraordinary to gain access to the drink inside.

Cherchesov used one of the Cokes as a bottle opener for the second, flicking off the cap at first attempt before taking a nicely-sized swig, followed by the customary exhale.

He’s not the hero that any of us asked for, but he’s the hero that we needed to save this tournament from descending into virtue-signalling madness.

Is Cherchesov the leader of the opposition against the anti-Coca-Cola movement, or is he as bad as the rest of them, but posing as one of the free-spirited?

fotnetwork has noticed with our keen eye that Cherchesov has in fact made the conscious decision to drink the ‘Coke Zero’ on offer, opposed to the full-fat, full-sugar, bog-standard Coca-Cola.

While it’s a decision which will be met with contempt from some, his decision to shun a bottle of water with the cameras rolling is good enough for us.

He’s a hero, and Ronaldo’s wokeflake-riddled gang can jog on.